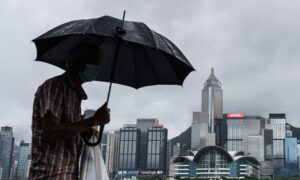 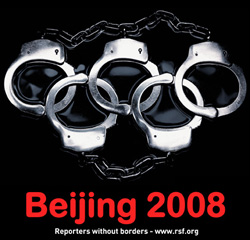 Reporters Without Borders launched its "Beijing 2008" campaign with handcuffs replacing the Olympic rings to remind people about the true background of 2008 Olympic Games. (www.rsf.org)
China

Rights Activist Arrested for Advocating “No Olympics, But Human Rights”

On August 23, the family of Yang Chunlin, a human rights advocate for landless farmers in Fujin, Heilongjiang Province, was informed by police that Yang was formally arrested by the Jiamusi Public Security Bureau (PSB) in Heilongjiang on August 13.

Yang was charged with “inciting subversion of state power.” The Jiamusi PSB said Yang's case was arraigned in the Heilongjiang Provincial Public Security Department and reported to the Ministry of Public Security.

According to an insider from the Jiamusi PSB, Yang, represented 40,000 landless peasants in asking for the return of their lands, and advocated “No Olympics, but Human Rights.” The advocacy made the high level officials of the Chinese Communist Party (CCP) panic. The insider said the impact was huge. So an order to arrest Yang was issued by the Ministry of Public Security, directed by the Heilongjiang Provincial Public Security Department, and the Jiamusi and Fujin PSBs arrested him.

Yang's family said that according to the regime's Criminal Law, after people are detained for 36 days, the PSB should have issued an official written arrest warrant. On day 37 of Yang's detention, August 13, his family requested a warrant from the Jiamusi PSB several times, but they did not receive a formal reply. Finally on August 23, when his family requested again, only then did the public security office give them an arrest warrant.

Yang's family told the reporter that the authorities did not give them an official arrest warrant according to legal procedures, nor did they reveal Yang's situation because they were afraid it would be exposed.

On August 23, Yang's sister went to the PSB again and requested, “When you detained Yang, you didn't give us a permit of arrest. When you formally arrested him, you didn't notify his family. Why? If you think he committed a crime, you should use the normal legal procedure. The way you processed him shows he did not commit a crime. Otherwise, why should you do it covertly?”

The public security told Yang's family that his case has been transferred to the procuratorate. They blamed Yang's family, because whatever they said to them, would be known to the world the next day (reported by the Epoch Times).

The Epoch Times reporter called the Jiamusi PSB. After the public security officer asked the reporter's name, he said, “Why don't you investigate in China. Are you controlled remotely from overseas? Who knows what organization you are in and who funds you. Does the U.S. government give you money and you work for it?” Then the official hung up the phone. No one answered the phone when the reporter called again.