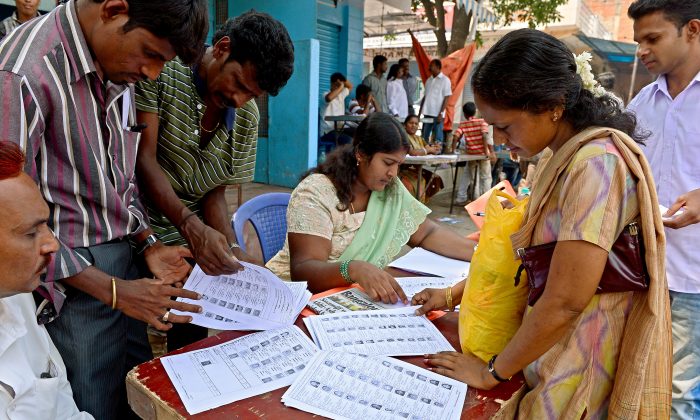 Indian voters check their names on a voters list near a polling booth during state assembly elections in Bangalore on May 5, 2013. As state elections take place across India throughout the year, activists worry about the impact of rampant list errors and obstacles to registration on democracy in India. (Manjunath Kiran/AFP/Getty Images)
India

Affluent youth in India are largely apathetic toward elections, learning that bribery and influence can accomplish more than a vote. Many others who rely on voting as their only source of political power, however, have found the franchise hard to realize.

In the May 5 Karnataka State Assembly elections, while the voter turnout was relatively high, millions were reportedly unable to cast their votes. Rampant errors were found on the electoral roll—including the highly publicized 4,818-year-old man registered to vote; and great obstacles stood in the way of citizens wishing to register.

Before the state polls, pro-ballot activists were busy encouraging people to register and vote. The campaign focused on the young and affluent, who are reluctant to vote, according to nongovernmental organization CIVIC.

“There is a lot of apathy among the affluent youth towards the electoral process, as their parents are probably able to get things done for themselves or their areas by bribing and using their influence with officials,” says Kathyayini Chamaraj, the executive trustee of CIVIC, based in Bangalore. “They hence don’t see the need to interact with politicians or be part of the democratic process.”

While the affluent are apathetic, the middle- and lower-income communities have trouble obtaining voter identification cards. According to a base line survey conducted by CIVIC in 10 Bangalore slums, 36 percent of those eligible to vote didn’t have voter ID cards.

Out of the 100 families surveyed, 75 did not know whether their applications for voter ID cards had been accepted or rejected, while 13 voters had more than two voter ID cards.

Bangalore’s electoral roll became an object of ridicule. A Times of India report highlighted some erroneous information on the roll: 39 citizens not yet born, 177 above the age of 200, and one 4,818-year-old man.

Prithvi, who did not wish to give his surname, is a member Smartvote, a campaign to increase voter turnout in Bangalore.

“In the last BBMP [Greater Bangalore Municipal Corporation] 2010 elections, my wife’s name was listed thrice,” Prithvi says, noting that he has heard of “lots of such duplication.” He believes that online registration could help prevent these errors.

Santosh More, manager of popular voting campaign, Jagatey Raho (Stay Awake), says no good system exists for updating the registry. This is a big problem in urban areas where a lot of migration complicates matters.

More’s organization based in Bangalore, Janaagraha, developed a system called Proper Urban Roll Electoral (PURE) that helps update electoral rolls every month with the help of citizen volunteers. There are many scattered attempts like PURE, large and small in scale, to improve the electoral system.

In the state of Meghalaya, elections took place in February. President of the nongovernmental organization Grassroot in Meghalaya, Mayfereen Lyngdoh, is worried that transparency and credibility are impacted when voter turnout is low. “This [low citizen participation] cannot change the political system,” she said.

While five more states in the country (Delhi, Rajasthan, Madhya Pradesh, Chattisgarh, and Mizoram) will go to vote in the latter half of the year, activists from states having already gone to polls this year describe the problems in Bangalore as emblematic of a general trend around the country. They raise concerns about the future of democracy in India.

Even if voters do manage to get properly registered, choosing the right candidate is another challenge.

Of 1,052 candidates from six major political parties running in the 2013 Karnataka State Assembly Elections, 220 candidates (or 21 percent) are facing criminal charges, according to a report by Karnataka Election Watch and the Association for Democratic Reforms (ADR). Of those candidates, 13 face murder charges and 18 face corruption charges.

Jaskirat Singh, ADR’s north-zone coordinator, says people often vote for a candidate when bribed by liquor or about 500 rupees ($10).

“We want people to understand [not only] how they should vote,” Singh said, but also “what they should know about the candidate before they go to vote.”