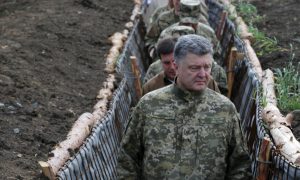 KIEV, Ukraine—Two gunmen from Ukraine’s nationalist Right Sector militia on Monday briefly took a 6-year-old boy hostage in western Ukraine as a standoff between the gunmen and police entered its third day.

Two people were killed Saturday in a Right Sector gun-and-grenade attack on police in a western Ukrainian city. Police had surrounded some gunmen in a wooded area of Mukacheve and have been trying to negotiate their surrender since then.

The Ukrainian Interior Ministry said in a statement Monday that police and security services had tracked two Right Sector gunmen outside Mukacheve but they took the boy hostage and managed to escape. It said as soon as the gunmen were at a safe distance they let the boy go.

Right Sector said its members were trying to confront policemen who they said were involved in a major smuggling business in the region.

Mukacheve is not far from the border with Poland, Hungary and Slovakia, and local officials have long faced accusations of setting up and controlling the smuggling of contraband.

Right Sector was one of the most militant factions in the massive protests in Ukraine’s capital that led to pro-Russia President Viktor Yanukovych fleeing the country in February 2014.

Since war broke out in eastern Ukraine between government forces and pro-Russia separatists several months later, Right Sector has fought on the government side and Amnesty International has accused the group of holding civilians as prisoners and torturing them.

Right Sector leader Dmytro Yarosh holds a seat in parliament, but the group has little formal involvement in conventional politics. Russia has been harshly critical of Ukrainian leaders for not taking a firm stand against Right Sector, saying Kiev’s apparent tolerance of the group suggests the government harbors fascist leanings.

Olena Hitlyanska, a spokeswoman for the Ukrainian Security Service, said on the Ukrainian Channel 5 that the authorities are trying to resolve the standoff peacefully and insisted that “it’s important that those who took up the arms illegally lay them down.”

“In turn,” she said, “we guarantee a fair and transparent probe.”

The Ukrainian Fiscal Service on Monday suspended all top officials of the Transcarpathian customs office pending a corruption investigation.

Regional governor Vasyl Gubal said on Monday that he had spoken to Yarosh, who went to the region on Sunday to negotiate, and “asked him to prevent more bloodshed.”

Gubal reported that Yarosh said he was committed to resolve the standoff peacefully but added that “the Right Sector members do not seem to follow Yarosh’s orders to lay down their weapons and leave peacefully.”

Earlier in the morning, two Right Sector fighters surrendered to police because of injuries sustained in an earlier shootout.