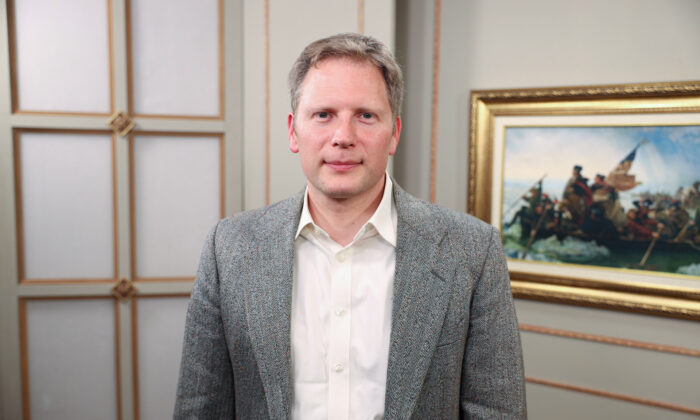 Former Trump adviser James Sherk says the pushback in Washington against an executive order that would allow the president to fire federal employees is confirmation that the policy is necessary.

Sherk is the director of the Center for American Freedom at the America First Policy Institute. In an interview for EpochTV’s “American Thought Leaders” program, he said he helped craft the Schedule F executive order after witnessing career bureaucrats blocking President Donald Trump’s agenda.

Schedule F would enable a president to fire powerful bureaucrats who engage in insubordination or intransigence. As it stands now, civil service protections make it nearly impossible to successfully fire a federal employee, Sherk said.

“No one votes for these career bureaucrats,” he said. “They have no accountability to the American people, and if the government is wielding its vast power in a manner divorced from what the elected representatives in Congress and the president in the White House is saying, then you have an unaccountable government.”

In August, after Axios ran a story about Trump’s Schedule F executive order, Democratic lawmakers introduced a bill to prevent that executive order from ever being implemented again by another president. But Sherk said the fact that the Washington establishment is up in arms about proposal means it’s a spot-on policy.

“Official Washington lit their hair on fire, which I think was a pretty good sign we’re right over the target,” he said.

James Sherk, Schedule F Executive Order Author, on How Unelected Bureaucrats Sabotage Policy, and What to Do About It

The U.S. Constitution stipulates that the federal bureaucracy be answerable to the president and the American people. But right now, federal employees have extensive removal protections. Firing career staffers often requires lengthy and costly legal proceedings, with most of the dismissals ultimately being overturned anyway, Sherk said.

“Given the importance of the functions they discharge, employees in such positions must display appropriate temperament, acumen, impartiality, and sound judgment.”

In early August, a group of Democratic senators led by Sen. Tim Kaine of Virginia introduced the Preventing a Patronage System Act, which would prohibit Schedule F from being implemented.

The legislation, which is co-sponsored by Sens. Dianne Feinstein (D-Calif.), Ben Cardin (D-Md.), and Chris Van Hollen (D-Md.) would prevent any position in the federal government civil service from being reclassified to Schedule F and bars the president from creating new job classifications without prior congressional approval.

“This legislation would put commonsense safeguards in place to protect the merit-based hiring system for our federal workforce, and I urge all of my colleagues to join us in supporting it,” Kaine said in an August news release.

“Keeping partisan politics out of our civil service is crucial to upholding its integrity and maintaining an efficient and effective federal government,” Van Hollen stated in the release.

Sherk wrote an op-ed in The Wall Street Journal titled “The President Needs the Power to Fire Bureaucrats,” in response to the Democrats’ new bill.

Sherk believes the reason Democrats support career staff and are against Schedule F is because the majority of career bureaucrats lean left and support the Democratic Party’s agenda.

The message of his op-ed was that it’s necessary to protect democracy.

“If you, in Congress, want the executive branch to implement the laws you passed, the bureaucracy has to be accountable to the people’s elected representatives,” he said.

The biggest problem in a federal workforce of over 2 million is not the lazy and unmotivated employees, Sherk said.

“The biggest problem are the very smart and capable and highly motivated people who don’t like the president’s policies and are very capable of using their positions to block it,” he said.

Sherk gave many examples of ideologically motivated career staff blocking the president’s agenda, including when the Department of Justice’s Civil Rights Division, during the Trump administration, was asked to investigate Yale University for civil rights discrimination due to reports that the school was turning down qualified candidates because they were white or Asian.

“The answer that came back was ‘No, none of us are willing to work on this,’” said Sherk. In addition, Sherk alleges that senior staff threatened junior staff that if the junior staff help with the investigation, there would be career repercussions for them.

Sherk said there were many such examples of bureaucrats refusing to implement Trump’s agenda. It was not all, but there were enough at the highest levels who did not comply, said Sherk.

“I mean, there’s a lot of good people out there. This is not every single one. But if you have a body that’s 80 percent healthy normal cells and 20 percent cancer cells, you’ve got an extremely large problem,” said Sherk.

And although top priorities are often implemented, secondary and tertiary priorities are not, because there aren’t enough people working on the president’s policies, he said.

“If you’re going to be in one of these policymaking roles, then you have to be accountable with the leadership so that if you are engaging in this sort of intransigence, they can just say goodbye,” said Sherk.

The Epoch Times contacted the U.S. Office of Personnel Management (OPM) for comment. The office did not respond by press time.

Tradition Goes Out the Window

Traditionally, both Republican and Democratic administrations have said they would respect the independence of the National Labor Relations Board (NLRB) and that general counsels get to serve out their terms, said Sherk.

It was revealed through a Freedom of Information Act request that Peter Ohr, who was appointed as acting general counsel following Robb’s firing, received emails from several career staff members in the OPM praising him for his “brave resistance” and saying how effective he’d been at stymieing the Trump administration’s policies, and that Trump would have done much more damage if it wasn’t for people like Ohr.

One job of the career attorneys in the federal government is to provide briefings on the various legal precedents relevant to a particular policy decision or issue.

“The career attorneys would only provide precedent [that] supported their preferred outcome to a case. They would not brief up precedents that supported coming to a contrary conclusion,” said Sherk, adding that Trump’s appointees couldn’t rely on the career attorneys, so they had to do a lot of their own legal research before they could implement the policies.

Deborah Birx is a famous example of this type of resistance and undermining of Trump’s directives, Sherk said.

Birx was one of Trump’s advisers during the COVID-19 pandemic. In a recent book, she recounted how she was asked by the Trump administration to loosen some of the lockdown measures being sent out as recommendations across the country. Birx said she removed the stricter language, but then quietly reinserted that language in more obscure part of the document.

“She just describes herself as systematically engaging in subterfuge to push for stronger lockdown recommendations,” Sherk said, adding that Birx was a “career employee who simply felt herself unconstrained by following the president’s directives.”

No Merit or Accountability

Sherk disagrees with Democrats and said the executive order would not change the merit-based system but would take away legal protections and court battles.

For the first 80 years of the civil service, the vision was for the agency to be merit based, Sherk said.

“It’s a completely modern 1960s innovation that you have the right basically a trial at law before an agency can fire you,” said Sherk.

Kash Patel: A ‘6-Year-Saga’ of Government Corruption, From Russiagate to Mar-a-Lago

Sherk cited George William Curtis, who advocated for merit-based employment and said it is better to allow the president the power to fire a civil servant “than to seal up incompetency, negligence, insubordination, insolence, and every other mischief in the service, by requiring a virtual trial at law before an unfit or incapable clerk can be removed.”

Schedule F says employees will not be hired or fired based on politics.

“But if you’re engaged in policy resistance, you’re out of here,” said Sherk.

In the August news release, the Democratic senators claimed that Schedule F would allow the president “to fire up to 50,000 federal workers and replace them with political hires.”

Sherk said the executive order would forbid firings based on political donations, race, gender, or other such factors. If an employee were fired, there would be a review procedure, but no lengthy legal battle would be permissible.

Sherk estimates that Scheduled F could potentially affect 50,000 of the over 2 million federal employees, and that it would hold those bureaucrats accountable to the top executive.

Schedule F was never implemented because of the time it took to check all legal parameters and because the COVID-19 pandemic took priority, said Sherk. If the pandemic hadn’t happened, Sherk said Schedule F probably would been signed and implemented in April or May 2020.

Rep. Chip Roy (R-Texas) introduced the “Public Service Reform Act” in July to address what he sees as corruption in federal agencies, but that sets up a potential battle with Democrats like Kaine.

“My bill would make all federal bureaucrats at-will employees—just like private sector workers—and claw back the inordinate protections some federal employees grossly abuse while helping legitimate whistleblowers and victims of discrimination get the justice they deserve,” Roy said in a news release. “This would empower federal agencies to swiftly address misconduct and remove underperforming employees, creating a workforce that once again serves the American people.”