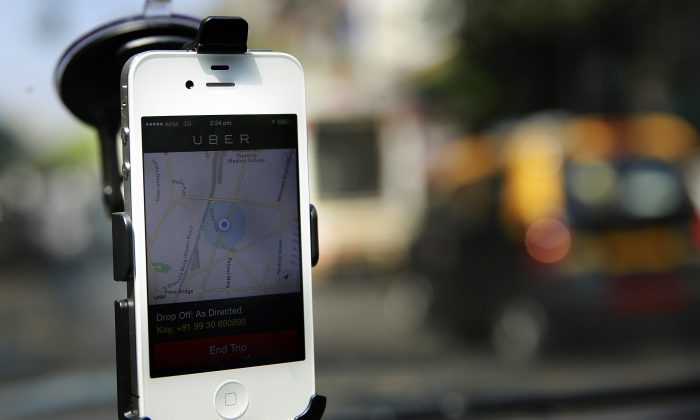 In this April 3, 2014 photo, a smartphone is mounted on the glass of an Uber car in Mumbai, India. (AP Photo/Rafiq Maqbool)
News

Right Move: Uber to Compete With NYC Cabs on Price

What happens to a highly regulated market where the regulator gets the price wrong? People make either too much or too little money. In the case of New York City taxis, it seems owners are making too much.

Former Mayor Bloomberg, himself not exactly a stranger to conflict of interest between the private and the public sector, said in a radio interview in 2012: “In a normal market, you’d say, ‘Well, just issue more taxi licenses.’ … Wrong. Because they have bought the legislatures and stopped the ability to do that. It is one of the great rip-offs of the public any place I’ve ever seen.” And he must have seen a lot.

Let’s briefly recap how this rip-off works and then see why independent car operator Uber’s move to compete with cabs on price is good news.

When former Mayor Fiorello H. La Guardia decided to regulate the cab market in the 1930s, he had a good reason. There were too many cabs looking for too few drivers during the Depression and cabbies were neglecting security to save costs. This is why the Haas Act limited the number of cabs that could pick up people on the street to 16,900, then further reduced the number to 11,787. The license to pick people up is called a medallion and now there are 13,336 for a population of 8.5 million. Some people say the city needs something like 20,000 cars and so far only the borough taxis have provided some relief.

Because the demand is much higher than the supply and the regulator has accommodated constant fare increases, the prices of these medallions went through the roof, rising around 16 percent per year over the last decade to more than $1.3 million as of August last year.

But there is another reason: The owners of the medallions are usually large financial corporations, which borrow cheap to buy the medallion and then lease it out to fleet companies or drivers for higher rates. This negatively affects the driver’s salary, so both the customer and the driver lose out. The financing company, however, makes an indecent return for essentially doing nothing.

However, as Bloomberg points out above, these companies have substantial lobbying power and have so far prevented a change to the system, which is far too lucrative for them.

This is where Uber comes in. The hip company from San Francisco recently cut prices for its economy limousine driver service uberX by 20 percent to undercut the yellow cab fare by $1–$2 depending on the ride. A ride from Williamsburg to the East Village now costs $15 with uberX and $16 with a yellow cab, according to the Uber blog.

It can afford to do that because it just raised $1.2 billion in equity capital valuing it at $18.2 billion. But there is another reason. Uber doesn’t have to finance the heavy $1.3 million license fee directly or indirectly and can offer flexible rates to its independent drivers.

In essence, its technology to hail a driver with its app from a smartphone and show the customer the location of the car as it approaches gets around the necessity to go to the street and lift up your arm.

The cars are usually there within a couple of minutes and you have the certainty of getting a ride. So this technology gets around the obsolete licensing and regulation system. Now that prices have come down this is good news not just for customers, but also for drivers.