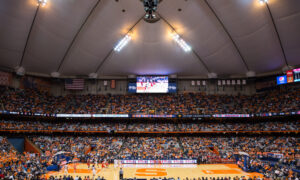 A free-speech group has called on Syracuse University to drop an investigation into a chemistry professor who referred to the virus that causes the COVID-19 disease as “Chinese Communist Party virus” and “Wuhan flu” in his course syllabus.

Syracuse University, a private college in New York state, on Aug. 25 announced that it had placed a professor on administrative leave, pending an investigation, for using “derogatory language” in a course syllabus that was “damaging to the learning environment” for students. The school said the wording was “offensive to Chinese, international and Asian-Americans everywhere who have experienced hate speech, rhetoric, and actions since the pandemic began.”

The professor in question is Jon Zubieta, who has taught chemistry at the college for 30 years. Underneath a heading of the section of the syllabus titled, “Special notices related to the COVID-19 pandemic,” he included in parenthesis: “Wuhan Flu or Chinese Communist Party Virus.” Photos of the syllabus circulated on social media, prompting an outcry among some students.

“My intention was to mock the euphemistic conventions of PC culture rather than the Chinese people or their great heritage and traditions,” Zubieta said in a statement released by nonprofit Foundation for Individual Rights in Education (FIRE). “The actions of the university in placing me under suspension and in practice seemingly supporting the accusations of racism and Sinophobia are deeply disturbing.”

FIRE wrote to Syracuse University Chancellor Kent Syverud on Sept. 22, urging to cancel the investigation and reinstate Zubieta. The group said that though the university isn’t bound by the First Amendment because it is a private institution, it should still fulfill its own policies that espouse a commitment to free speech.

“If you’re going to promise your professors free speech, academic freedom rights, you have to uphold those promises, even when it’s difficult or unpopular to do,” Zach Greenberg, author of the letter and a program officer at FIRE, told The Epoch Times.

Greenberg said that Zubieta has received many messages online calling for him to be fired.

The chemistry professor has been “from all accounts a model employee,” Greenberg said, noting that prior to this incident, Zubieta has never had any misconduct cases or allegations of misconduct made against him in his three decades at the university.

Greenberg said that while universities are free to publicly condemn hate speech, bigotry, and xenophobia, FIRE’s position is that “the answer to distasteful, hateful speech is more speech. It’s not censorship or violence, or in this case, firing professors.”

Syracuse University said its speech policies “are designed to balance free expression with the University’s obligations under federal and state civil rights laws to maintain an educational environment that is devoid of discrimination or harassment aimed at certain protected groups.”

“As a community, we cannot and will not condone speech that harasses, threatens, or intimidates an individual or a group of individuals,” the university said in a statement.

While some Chinese students at Syracuse have expressed being offended by Zubieta’s descriptors of the pandemic, one Chinese student from nearby Buffalo University recently penned a letter decrying Syracuse’s move.

“As a native Chinese, I do not feel offended when I heard [sic] these words,” Liu Tianyu, a graduate student at Buffalo’s history department, wrote in a letter to the editor that was published on the school newspaper The Spectrum on Sept. 14. The student said that “many Chinese people use the words ‘Wuhan Flu’ and ‘Chinese Communist Party Virus,'” noting that earlier in the pandemic, Chinese people commonly referred to the outbreak as the “Wuhan Flu” before the Chinese regime prohibited its usage.

Liu also wrote that the Chinese Communist Party (CCP) suppressed doctors from sounding the alarm about the outbreak in the early stages, worsening the disease’s spread.

Liu, in an interview with The Epoch Times, said he was “very surprised” when he first saw the news about Zubieta’s case.

“If this happened in mainland China, a professor being fired for saying CCP virus, that would simply be a common occurrence. People have grown numb to this,” he said.

“But I never expected that something like this could happen in the United States.”

This initial surprise later morphed to anger, Liu said. He believed Syracuse’s decision amounted to punishing an individual for a “speech crime,” a move Liu described as a “big mistake.” Liu wrote the letter to the editor because he was worried something similar might happen at Buffalo University, he said.

“America, in my impression, is a country that values freedom of speech, and everyone should be able to freely express their thoughts…You shouldn’t receive an administrative penalty for a mere word or sentence,” Liu said.

He believed that the professor’s expression did not amount to racial discrimination, as it was not directed against any racial group or other groups of students. Rather, it involved expressing “concerns about the current Chinese regime’s governance and criticism of the CCP’s handling of the outbreak.”

“He raised a personal opinion, and perhaps he wants to use this to make people think more deeply about how this pandemic broke out and the virus’ connection with the CCP system. Regardless, he has the right to express these views,” Liu said.

The Epoch Times refers to the virus as the CCP Virus. As explained in a March editorial, the word choice is intended to hold the Chinese regime accountable for its coverup of the outbreak, which led to the global spread of the disease.

This article was updated to include a statement from Syracuse University.