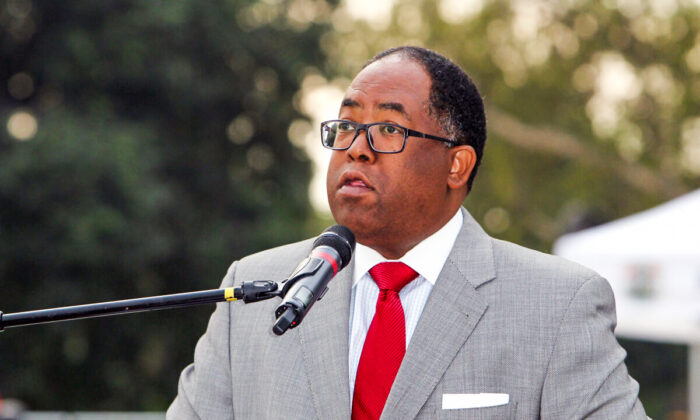 Los Angeles City Councilman Mark Ridley-Thomas sued the city July 28 over the decision to suspend his pay and benefits following his indictment in a federal corruption case.

The lawsuit names City Controller Ron Galperin and alleges that Galperin’s decision was “unauthorized, unlawful and politicized.” It seeks a ruling to strike down the decision as unlawful, along with attorneys’ fees.

Ridley-Thomas was suspended from the council last October after his indictment.

Chelsea Lucktenberg, Galperin’s director of communications, declined comment Thursday, citing pending litigation. But in a statement after suspending Ridley-Thomas’s pay last year, Galperin said he “could not use city money to pay the salary of an elected official facing federal bribery and fraud charges who is now legally unable to do his job.”

“Mark Ridley-Thomas is no longer empowered to carry out the duties and responsibilities for which he was elected, and he can no longer be present to effectively serve his constituents or represent their interests at City Hall,” Galperin said at the time.

Rob Wilcox, the director of community engagement and outreach for the City Attorney’s Office, said the city’s lawyers would review the lawsuit and declined further comment.

Ridley-Thomas and former dean of the USC School of Social Work Marilyn Flynn were charged in a 20-count indictment alleging a secret deal in which Ridley-Thomas—when he was a member of the county Board of Supervisors—agreed to steer county money to the university in return for admitting his son Sebastian Ridley-Thomas into graduate school with a full-tuition scholarship and a paid professorship.

Flynn allegedly arranged to funnel a $100,000 donation from Ridley-Thomas’s campaign funds through the university to a nonprofit organization to be operated by his son, a former assemblyman. The donation prompted an investigation by the U.S. Attorney’s Office in Los Angeles that remains open, prosecutors said.

Ridley-Thomas’s trial was delayed until November earlier this month.

Herb Wesson, who was appointed the temporary replacement to represent the 10th District for Ridley-Thomas in February, was blocked by a Superior Court judge last week from performing any council functions.

The decision by Los Angeles Superior Court Judge Mary Strobel effectively blocks Wesson from representing the district, although it did not formally remove him from the post.

The ruling marked the second time Strobel has issued a restraining order against Wesson’s service on the council. On Feb. 24, Strobel sided with the Southern Christian Leadership Conference of Southern California’s (SCLC) challenge to Wesson’s appointment, issuing a temporary restraining order that blocked him from serving.

But she later vacated the order and declined to issue a preliminary injunction, saying that procedurally, the SCLC needed to obtain permission from the state Attorney General’s Office to proceed with its legal challenge.

According to the appointment, Wesson is supposed to hold the position through Dec. 31 unless Ridley-Thomas is acquitted or the charges against him are dropped.