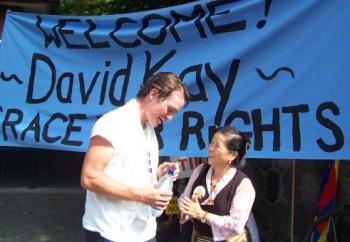 A representative of the Canada Tibet Committee greets David Kay as he arrives at the Chinese consulate in Vancouver. (Ben Taylor/Epoch Times Staff)
Canada

Steven Harper’s lack of presence at the Olympics ‘spoke volumes’

Nearing the end of his “Race for Rights” across Canada, David Kay was welcomed by Tibetan Canadians, Falun Gong practitioners and their supporters as he arrived at the Chinese consulate in Vancouver on Saturday.

A former Team Canada member and Pan American medalist, Kay began his journey at Mile Zero in St. John’s on July 13 and will finish it at Mile Zero in Victoria on August 23, covering 7,700 km in all.

Organized by the Canada Tibet Committee, the ride aims to raise public awareness of China’s human rights record and to call attention to the Chinese regime’s responsibility to improve rights as host of the 2008 Beijing Olympics.

Kay, who is traveling solo without a support vehicle, said the response has been “pretty incredible” in the cities and towns in which he stopped along the way.

In an interview with The Epoch Times, Kay said that through the journey he learned how concerned Canadians are about human rights in China and that “most Canadians feel China has not lived up to its promise of improving human rights and feel very ambivalent about the Olympics.”

He added that while he was a bit disappointed that Canadian athletes didn’t speak up about rights while in Beijing, he felt that on the whole “Canadians did make a pretty strong statement.”

“I think Steven Harper’s lack of presence there spoke volumes — he may not want to admit that but I think that’s how it’s being interpreted. It’s very much clear that Canada is ambivalent about the missed opportunity that this Olympics has let go and the lack of real active diplomacy that the IOC has not built to pressure China to keep its promise.”

He also said he thought that the International Olympics Committee and the Games’ corporate sponsors should have made an effort to hold China to account on the human rights front.

“I was disappointed with some of the real big corporate sponsors for not taking a harder line with the Chinese government when it came to human rights abuses, just like the IOC who had this silent diplomacy that amounted to reversal [for human rights].”

There are fears that in the wake of the Games, China’s human rights situation might even deteriorate further, he said.