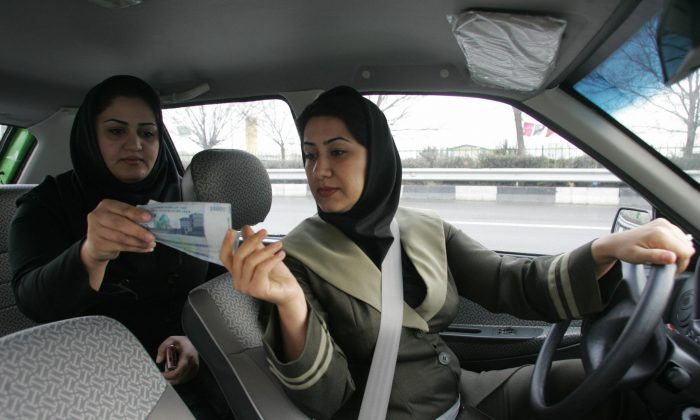 Riding in Pink Cars Without Boys

New Delhi has a taxi service, driven by women, which picks up only women passengers. Mexico City has women-only buses. And Rio de Janeiro’s subway has a “pink car” that is exclusively available to women at peak travel times. Just this month, Thailand reintroduced women-only train cars.

All of these changes are intended to reduce harassment and violence against women – and to help them feel safer moving about the city. But is segregated public transport the best solution to the challenges of being a woman en route? We asked six experts: What’s the best way for a city (in the U.S. or elsewhere) to come up with a plan to keep woman safe as they use public transportation?

A Lebanese woman taxi driver stands by her car outside the office of ‘Banet Taxi’ (Girls Taxi) in Mtaileb, northeast of Beirut, on March 10, 2009. (Ramzi Haidar/AFP/Getty Images)

The first documented women’s-only transportation was available on the British Grand Junction Railway in 1845. From 1912 until World War Two, Tokyo operated “Flower Trains” during rush hour to protect schoolgirls from sexual harassment. And in 1913, Olive Schultz operated a women’s-only taxi in Manhattan, equipped with “a wardrobe of fur coats and woolen mittens” for transporting suffragettes to the vote and female theatre patrons at night.

That is to say, the resurgence of women’s-only transportation is a harsh reality check, making it clear that the harassment women face on public transportation today has not changed in over 100 years.

In the past century, transit agencies have failed to implement changes to design and policy that meet the needs of all riders, limiting their scope to 9-to-5 commuters. The best way for cities to keep women safe on public transportation is to make the system safer for everyone—for example, to maintain lighting, to place subway entrances and bus stops on high-trafficked streets, to increase service frequency, and to design vehicles accommodating to riders traveling with children. These practices promote equity and access by showing that all riders have the right to safe public transportation. Until there is real public policy reform in this area, women’s-only options remain a useful tool for advancing gender equality on public transportation.

The taxicab industry is a classic example of an industry rife with issues of trust. Many taxicab regulations are designed to ensure safety and fair treatment for all passengers, including women, such as clearly marked fares and driver background checks.

Yet in taxi regulations (and conventional transit planning) the specific concerns of women are rarely considered.  Scholars have long established that women travelers have different perceptions of risk than men. Waiting for a taxi at the curb or getting into a car with a stranger are two places where men and women (not to mention people of color) have different experiences.

Although new Transportation Network Companies (TNCs) like Uber, Sidecar and Lyft are taking passenger safety seriously through driver rating systems and swift action when problems arise, they must also be transparent about their driver background checks and make clear what actions passengers can take if they feel unsafe (perhaps through a button directly in the phone app). But most importantly, private transport companies and public authorities should include women in roles of power. The best way to ensure that women are fairly considered in planning for taxi services and TNCs is for women to be heard.

Violence and harassment against women commuters can be traced back to men’s control over travel, and women’s forced role in the home. For this reason, the best solution to gender-based violence in transportation is not to ‘keep women safe,’ but rather to promote women’s equal right to mobility.

Designing transport specifically for women may not be a bad solution. Many cities around the world are adopting women-only transportation, not only to give women a safe place to travel, but also as a tactic to reverse long-held ideologies that immobilize women.

In Mexico City, for example, women-only buses are just one part of a larger program called Viajemos Seguras (We Women Travel Safely), which is also credited for new laws formally recognizing violence against women in transportation as a form of gender discrimination.

Likewise, feminist groups in New Delhi, such as Jagori, are using women-only transportation to advocate for women’s equal right to the city, as well as promote women’s free mobility.

For many cities, women-only transportation is not simply a method to protect women from the violence that they encounter, but is also a tactic for confronting the traditional gender norms that deny women equal access to travel.

As the journalist and urban activist Jane Jacobs described in The Death and Life of Great American Cities, a safe public environment can exist when those who are the “natural proprietors” of the space–the transit workers, riders, and local shop owners–can watch and care for it.

The challenge with public transportation is that as we move through the system–from bus, to tram, to subway–we experience a range of spaces that can be public and private, stewarded and forgotten, active and empty. This confusion means that after any incident on public transport, the usual reaction by both the transport authorities and the public is to increase surveillance or segregate public spaces by gender.

These reactions have serious flaws. Surveillance cameras do bring more eyes to the street but they can also have the opposite effect to what Jacobs intended, creating an uncomfortable sense that the space is privately owned and that people entering it are outsiders under observation.

Segregation, while it aims to create “safe” spaces, also creates targets. If most women on a subway train are in the women-only subway car, then the women who are not may become targets. Instead of reacting with surveillance or gender segregation, we would be better served by redesigning public spaces to cultivate wider stewardship of these shared areas, not with cameras, but by getting more real “eyes on the street.” One way to make this possible it to increase visibility in transport hubs—for example, making it possible to see everyone who is waiting on a platform and clearly indicating all possible ways to leave the area if one were to feel unsafe.

Public space implies the free movement and use of an area by all people. So, if there is a public space without women in it, can we really call it public? That’s the question we have answer if we choose to segregate by gender, rather than wrestle directly with what it means to create spaces for everyone (and therefore, that are safe for everyone).

This is not to say that gender separation tactics can’t be effectively used for social change. For example, in 2001, the mayor of Bogotá, Colombia transformed the city through a “Night for Women”, assigning a woman-identified chief of police for the evening and encouraging men to stay home with children. The objective of this exercise was not only to give women the freedom to have a night on the town, but also to temporarily transform the commons into a space they could feel safe in. The program was so popular (over 700,000 women participated the first night) that it was instituted regularly and inspired similar programs in Cartagena, Santa Marta, Barranquilla, and other Colombian cities.

This appears similar to the examples from New Delhi and Mexico City, but there is a crucial difference: Bogotá’s gender separation was temporary—a short-term, government-sponsored activity crafted to help change the social norms around how men and women traditionally use and view public space. By contrast, the creation of permanent separate spaces leaves existing norms in place and thereby contributes to the status quo.

We need better social norms, not separate rooms. But to make change, a community has to be able to visualize and understand how the new norms would play out in real life. That’s the power of temporary takeovers: They demonstrate the possible—what the world could be if we acted differently, even before society writ large is ready. With the recent spike of educational humor about sexual harassment and assault in the U.S., we’re already exploring what safe spaces for North American women could look like using this kind of active visioning. If we want change, we must continue to do so.

Women’s only transport innovations may simply be “band aid” solutions that do not deal with the underlying political and societal conditions that shape how women use buses, trains, and other services. Public safety and transportation are holistic issues that are influenced by local context and politics, and often the forums in which decisions are made lack a diversity of voices. Critical stakeholders, including women, need to be represented and engaged early and often throughout transit planning.

In the United States, a more representative swath of citizens, including men and women, could be given a substantive voice in how public transit decisions are made. This could include face-to-face opportunities for residents to work directly with government officials. People could identify local community transit needs and articulate the ways in which factors such as location, lighting, and laws impact safety.  Digital tools, such as crowd sourcing platforms, could let people propose ideas, rank, and even vote for top preferences.

Many cities in the U.S. and internationally are already experimenting with more directly involving citizens in deciding public budgets or taking responsibility for local public services.  A similar approach in public transit could help create better and safer public transport, and in turn, help build healthier communities.