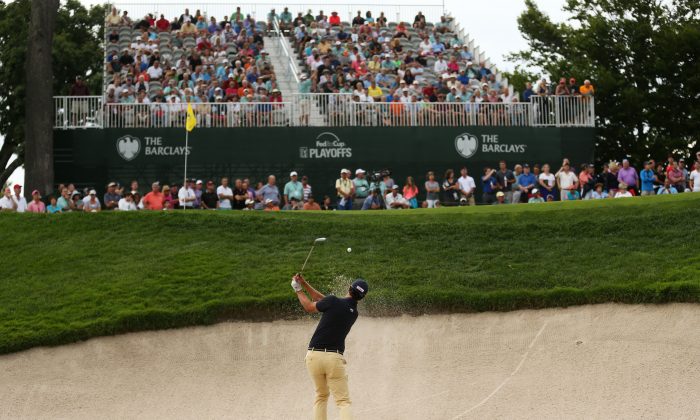 Adam Scott of Australia plays his fourth shot on the 17th hole during the second round of The Barclays at The Ridgewood Country Club on August 22, 2014 in Paramus, New Jersey. (Darren Carroll/Getty Images)
Golf

Ridgewood Country Club Holding its Own at Barclays

The start of the Fed-Ex playoffs provides a rotation of different courses on a yearly basis. The kick-off begins with its yearly only visit to the greater New York / New Jersey metropolitan area and for the third time Ridgewood Country Club in Paramus, NJ—roughly 15 miles from New York City—serves as host for the 3rd time for The Barclays event.

The present day course came into existence just as The Great Depression was on the horizon. The design is the handiwork of the legendary A.W. Tillinghast—a man who worked on approximately 265 courses.

“Tillie” left a legacy of superior courses—many of them in the suburban locations of New York, New Jersey and greater Philadelphia areas. Ridgewood CC opened its doors in 1929 and just six years later served as venue for the 5th Ryder Cup Matches.

For a number of years the course would slide back into the shadows as other Tillinghast courses captured more attention in hosting various major golf events such as the US Open and PGA Championship. Venues such as Winged Foot in nearby Mamaroneck, NY and Baltusrol in Springfield, NJ became steady participants over the years and continue to play a major role in identifying the game’s greatest players.

Baltusrol will host its 2nd PGA Championship in 2016 and in 2018 Winged Foot will once again test the finest players in the world when its famed West Course hosts the US Open for the 6th time. In 2019 Bethpage Black—the 90-hole multi-course complex will host the PGA Championship and in 2024 the Ryder Cup Matches will come there to Long Island for the first time.

Tillinghast was born in Philadelphia in 1874 and was born into a family of means. His skills went beyond simply designing courses as he played in a number of majors golf events such as the U.S. Open and Amateur in its earliest years.

The remarkable aspect of a Tillinghast design is that there are no template layouts that carry over time and time again. It would be remarkable for any student of golf course architecture to pinpoint the qualities of Winged Foot, Baltusrol, Bethpage / Black and Ridgewood. His philosophy was simple.

“The merit of  any golf hole is not judged by its length but rather by its interest and its variety as elective play is apparent.  It isn’t how far, but how good.”

This week’s PGA Tour stop at Ridgewood is just down the street from where Tillinghast lived a good bit of his life in Harrington Park. The noted architect was fond of saying putting surfaces were as unique as the faces of a human being—each being a bit different in its overall form and shape.

“Tillinghast was the first designer who consciously set out to create golf holes that were visually attractive. He helped transform golf course architecture from its roots in nature to a greater art form,” said fellow architect and Tillinghast historian Ian Andrew. “He drew on the principles of landscape design, engineering and art to transform a property into a spectacular playing field. To Tillinghast’s credit he also consistently changed style from one project to the next.”

Ridgewood is not well known to many golf fans who follow the PGA Tour but for the player competing the qualities of the layout are much appreciated. Jim Furyk has stated the course is the best of the bunch that routinely hosts The Barclays each year. Other players have echoed similar feelings.

This year after two rounds the low scoring numbers have reached eight-under-par and the course has been a stubborn foe with thick dense rough just off the fairways. In many ways the texture of the layout is more “major like” than standard tour set-ups. Yet, low scores can be had—witness the second round scores by Henrik Stenson and Jason Day—each fired a seven-under-par 64.

The Great Depression had a significant impact on Tillinghast as courses faced massive membership losses and others simply closed their doors. Tillinghast was fortunate that Ridgewood’s head professional—George Jacobus—was also PGA President during those dark days. Jacobus convinced PGA leaders to bring on board Tillinghast as a consultant to visit courses and provide expertise as needed. All told Tillinghast would visit roughly 400 courses before becoming so disenchanted that he packed up his bags and moved with his wife to California. It was there that he opened an antique shop—selling his collected possessions. In 1942 he passed away in Toledo, OH at the age of 68. For many years Tillinghast remained an invisible giant who would remain under-appreciated until an article in 1974 authored by the late Executive Director of the United States Golf Association (USGA) Frank Hannigan was published in Golf Journal—highlighting the several courses that hosted various USGA events that year.

One of the many interesting elements of Ridgewood CC is testing players to “work the ball” off the tee to get to the premium locations for approach shots to the protected putting surfaces. No one hole shows this better than the final hole of this week’s event.

The 470-yard par-4 18th at Ridgewood is textbook Tillinghast greatness. The hole calls for a left-to-right movement off the tee and is protected on both sides by magnificent oaks. Distance alone is not sufficient—shaping the shot and marrying distance is the call of the day here. Even after reaching the fairway the green is simple in its appearance but ever challenging once you reach its surface. The green slides from right-to-left and two bunkers are positioned off to the left for those who pull their shots in that direction. A closing birdie is possible—but Tillinghast was never one to simply allow for indifferent play to even sniff a reward.

The greatness of Tillinghast is the continued relevance so many of his designs continue to provide. Ridgewood has once again brought to light what this brilliant course creator could do. The final 36 holes of this year’s Barclays event will likely crown a worthy champion. The shadows of Tillinghast will likely remain in the dark recesses for many, but his impact on the game lives on so capably in the finished projects he masterminded.