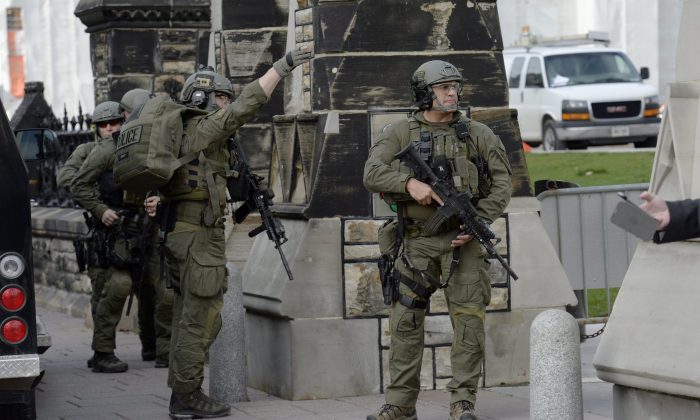 A Royal Canadian Mounted Police intervention team walks past a gate on Parliament hill in Ottawa Wednesday Oct. 22, 2014. A soldier standing guard at the National War Memorial has been shot by an unknown gunman and there have been reports of gunfire inside the halls of Parliament. Emergency responders are still on the scene as paramedics performed CPR on the soldier before he was taken away by ambulance. (AP Photo/The Canadian Press, Adrian Wyld)
Canada

It appears that the shots exchanged in or near the Rideau Centre may have been between police officers and a shooting suspect.

At least one suspect has already been shot dead.

The nature of the shooting at Rideau Centre is unclear but Ottawa Police confirmed it.

“Shooting incidents occurred at National War Memorial, near the Rideau Centre and Parliament Hill this morning,” the police said via Twitter.

However, the general manager of the centre told CFRA Ottawa that no shooting happened at the mall but that they were asked to evacuate.

And the police later said that the shooting incidents did not include Rideau Center.

On the other hand, CBC said that a third shooting happened at the mall.

Shot at Rideau Centre. Police rush us away #cbcott https://t.co/ezk1Cx8tZm

“The shooting was near the Rideau Centre, police say. Not inside it,” CBC said via Twitter.

He posted two videos just after noon showing a shot fired at the centre.

Police heading with their guns drawn towards the entrance of the Westin hotel, near Rideau Centre mall pic.twitter.com/3Cr35PSGhc

The centre said via Twitter that “we are in full lockdown until further notice.”

People couldn’t believe that a shooting happened at Rideau Centre.

“Seriously man? At the Rideau Centre? Come on now. Like the most peaceful place ever,” said on Twitter user.

The first shooting at the National War Memorial left a soldier wounded.

A second flurry of gunshots happened inside Centre Block.

“The Rideau Centre shopping mall, the National War Memorial and Centre Block are on a straight 2-block line along Wellington St,” noted a resident via Twitter.