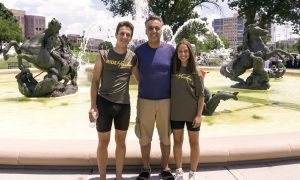 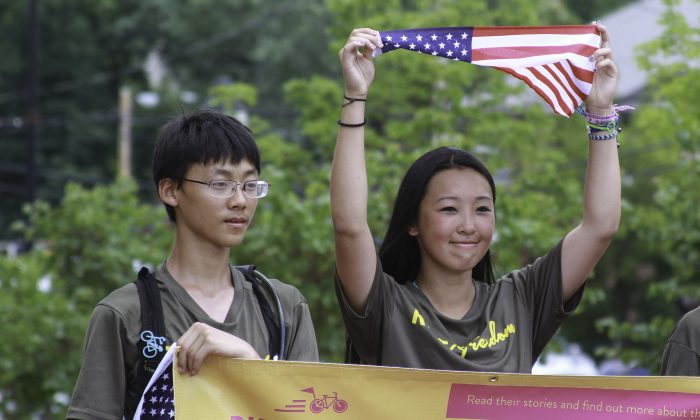 A budget war in the Illinois state legislature had a moment of  peace when Ride2Freedom came to town.

Ride2Freedom is a team of young people cycling across America to raise awareness of orphans in China. They stopped in Springfield, Illinois on July 1, and the legislature invited them to sit in on an emergency budget meeting. Everyone in the room gave an ovation for Ride2Freedom. The cyclists turned and showed the flags on their backs, representing their countries, including Argentina, Israel, China, Germany, Peru, Hungary, Iran, and the United States.

“That was a great moment,” said Kristine Feng, a 15-year-old from New Jersey, and one of the Ride2Freedom group.

The Ride2Freedom cyclists, ranging in age from 11 to 25, started their continental bike trek from Los Angeles on June 1. They are journeying to Washington, with stops all along the way to raise awareness about the persecution of Falun Gong, also called Falun Dafa, in China.

That was a great moment. Kristine Feng, 15 years old, on a transcontinental bike ride with Ride2Freedom

Falun Dafa is a peaceful meditation practice that has been persecuted in China since July 20, 1999. People who practice it do simple exercises and meditate, and try to follow the principles of truthfulness, compassion, and forbearance.

The Ride2Freedom team will join a rally for Falun Gong on Capitol Hill in Washington on July 16 and hold a concert and candlelight vigil at the Lincoln Memorial on July 17. They will leave their bikes behind, but their journey will not end. They will travel to the United Nations in New York. Some will continue to Beijing where they intend to rescue and bring to America five orphans whose parents were killed for their faith.

Kristine spoke on the phone after she had finished a 14-mile shift on her bike heading to Ft. Wayne, Indiana. “I feel great,” she said. “The road was really flat and there was no wind today, so it was a really fun ride.”

Most Ride2Freedom riders have little cycling experience. “Before this journey, I’d bike only a few times a year for fun, but nothing as arduous as this,” Kristine said.

Kristine took up the challenge because she felt it would be a rare chance to “raise awareness and spread the word across the world about the persecution.”

Awareness has been raised. Kristine said most people have been shocked to hear what is going on in China. They support the youngsters. One favorite show of support has been people taking selfies of themselves with the young riders, and posting the pictures with the hashtag #Ride2Freedom.

For Kristine, the journey has been more than a physical challenge. In a very short time she has had to become a leader and a manager. She’s one of two teen coordinators who meet every day with the team leader. They plan the logistics.

“Every night we would ask the guy who makes the road plan and the map what the next day would be like. After we would get that information from him and he would tell us the order of the teams that are going (beginner, intermediate, and advanced) … we would figure which teams [should be] on which parts of the road. For example if we know that a part of the road is elevated, then we will give that lap to the advanced team.”

Over time Kristine said she noticed that they all have become much better communicators. This has been daunting. Some of the riders speak Chinese as their first language. Other speak different native tongues. “The language barrier was one of the problems that we had to overcome,” she said.

In the beginning there were some problems getting people to listen to the leaders. It was hard to be patient with “those who would not do what they were asked. After that we worked it out. We talked and everyone started to better understand what needed to be done.

So I would say after that, that was the toughest time, but now everything is going very smoothly,” she said.

“Now everyone is very patient with each other and the communication has become much better,” she said.

If only state and federal legislators would take this path.