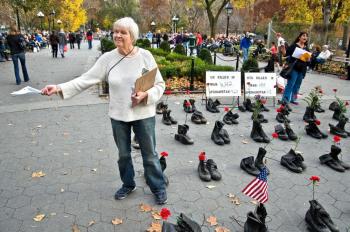 biggersmaller
Print
NEW YORK—In an effort to combat gun violence and the proliferation of guns in New York City, a Ride, Walk, and Rally against violence named “Tsunami of Peace” was launched across all five boroughs on Tuesday. On Wednesday, the march continued across the Brooklyn Bridge and into City Hall park.

As they marched along the Brooklyn Bridge, demonstrators chanted “Stop the violence, we want peace, save our children. What we want peace. … Stop the killing! Stop the shooting! … Whose children? Our children!"

At the front of the march, empty coffins representing the death of the city's young people were rolled on carts.

A social worker named Chris, who lost her two sons due to gun violence, joined the rally with the organization Mothers Against Violence. She painfully described how one of her son's lost his life in a shooting, "My son was buying coffee at a break from work, and there was a robbery going on, and the robber was threatening and demanding with a gun. …My son was dead,” said Chris. “We have the best laws in the country against having handguns, however the guns brought from other states killed our young people.”

She participated in the rally in the hope of gaining more support from people around the U.S. to combat violence and send a word to city leaders that they need programs to teach children the harm of violence.

The rally gained support from a variety of organizations, including Life Camp, NYPD, FDNY, and NYAGV (New Yorkers against gun violence). Organizers and supporters gathered at City Hall park after the rally to make speeches bringing attention to the issue, highlighting a message to the leaders of city government, and demanding a change in policies, and also to gain support from surrounding communities to join anti-violence organizations.

The rally will continue on Saturday in Washington D.C. to put more pressure on the White House, according to organizers.