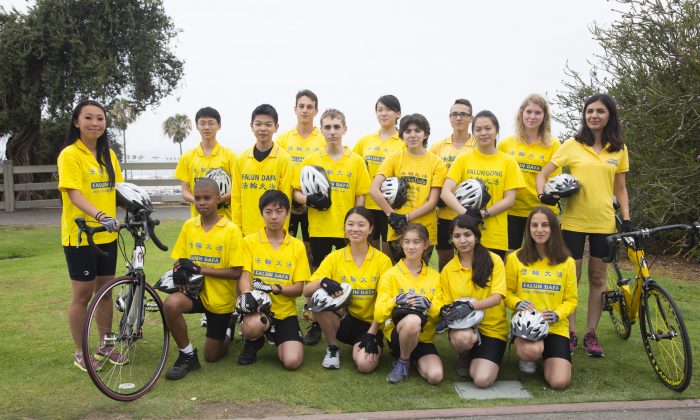 “Youth Ambassadors” from more than 10 countries pose for a photo before a rally Sunday, May 31. They are cyclists for Ride to Freedom, a group of 30 young people who will bike from Los Angeles to Washington, D.C., and finally New York on a 3,000 mile trip to ultimately rescue five orphans in China whose parents were killed because of their beliefs.
China

SANTA MONICA, Calif.—A rally in support of Ride 2 Freedom, a human rights initiative involving biking across the country, took place at Palisades Park, May 31. Participating in the ride will be a group of two dozen “youth ambassadors” who will bike from Los Angeles to Washington, D.C., and finally to New York on a 3,000-mile journey to ultimately rescue five orphans in China whose parents were killed for their beliefs.

“President Xi, you are a father. As a parent, does it not pain your heart to think of these suffering children?” asked Annie, while reading the letter.

Aila Verheijke, 11, spoke about her grandmother being covered with bruises on her body after being arrested and beaten in China because she practices Falun Gong. “It’s not a crime to practice Falun Gong, so the CCP [Chinese Communist Party] shouldn’t capture us and torture us. I want the children that are being orphaned to have a happy life like I do.”

According to the Chinese regime’s own statistics, there were 70 to 100 million people in China practicing Falun Gong before the persecution against the group began in July 1999. Falun Gong is a spiritual practice rooted in traditional Chinese culture that includes meditative exercises and an emphasis on moral living.

“I want to express my support for the young riders of Ride 2 Freedom and their entire support team. Your concern for those who are fighting for human rights and religious freedom in China is commendable, and your concern has turned into action. I wish you success on your mission to fight for truth, justice and basic human rights for the young people in China, who have become orphans due to the persecution against Falun Gong practitioners in the country.

“Last year, I supported the H. Res. 281 as a cosponsor, which expressed the concerns from the U.S. Congress over the persistent and credible reports of systematic, state-sanctioned organ harvesting from non-consenting prisoners of conscience, in the People’s Republic of China, including from large numbers of Falun Gong practitioners imprisoned for their religious beliefs, and members of other religious and ethnic minority groups.

“As a Member of Congress, serving on the House Foreign Affairs Committee and the Asia Pacific Subcommittee, as well as a member of the Tom Lantos Human Rights Commission, I will continue to champion human rights and religious freedom issues in China and around the world. Once again, thank you for your tireless efforts in educating the international community on the ongoing human rights violations against peaceful activists, in particularly, Falun Gong practitioners in China.”

Joan Collins, president of the United Nations Association, Los Angeles Chapter, is a senior producer of internationally known theatrical productions such as the Hollywood Bowl Sunrise Service televised with famous stars. She spoke at the rally, saying, “We are together in one voice to bring awareness and stop the pain and be the best humanity has to offer on behalf of all people in the world. We are with you!”

“This year we see progress in stopping the persecution and subsequent illegal, live, forced, organ harvesting of Falun Gong at the hands of the Chinese communist regime,” said Dr. Dana Churchill, Doctors Against Forced Organs Harvesting, West Coast Delegate. Last year, a resolution against “systematic, state-sanctioned organ harvesting from non-consenting prisoners of conscience” in China garnered the support of 245 bipartisan legislators in the House of Representatives.

On June 1, Ride 2 Freedom team members presented their open letter to the Los Angeles Chinese Consulate, but after numerous requests, were unable to find anyone to accept the letter. Multiple calls were made to the Consulate, but employees hung up as soon as they learned about the nature of the letter.

As Annie slowly lowered the phone from her ear, the area around her eyes reddened, and she began to cry. It was a unique moment for her, as if she experienced a loss of innocence. Not everyone in the world is good. Not everyone cares.

She then proceeded to slide the letter into a mailbox nearby.

The young riders will take turns riding their bicycles in teams of about seven or eight while three large vans accompany them.

Each team plans to ride for two hours a day for a total of about 50 miles. They plan to meet with Ban Ki-moon and President Barack Obama, and a select number of riders and senior team leaders will travel to China to rescue five orphaned children.