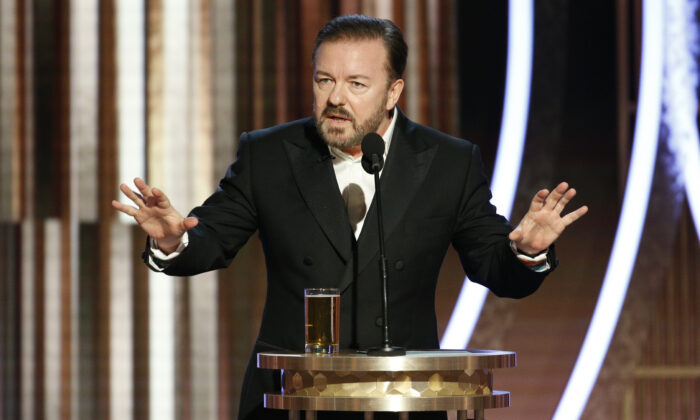 British comedian Ricky Gervais has responded to backlash over his 2020 Golden Globes opening speech after it was criticized for being “right wing.”

It comes after Vanity Fair reporter Mark Harris took to Twitter on Jan. 6 where he condemned Gervais for “yelling” at celebrities who he said had “used their stage time to say valuable things.”

“Here’s my Ricky Gervais problem: The idea that celebrities are not only pampered babies but hypocrites who cause the problems they make speeches deploring and should therefore shut up and act/sing/be grateful is a right-wing talking point, and an especially stupid one,” he wrote.

“It’s not an act of speaking truth to power or of bravery to attack celebs on that front—it’s a tired way of scolding people into silence because you don’t like what they’re saying, and saying that he’s ‘calling out’ the hyper privileged is just the same thing in a new guise,” Harris continued.

“You’ll never go broke ending a night scowling at celebrities and saying, ‘Get drunk, do your drugs, [expletive] off,’ which I think were his last words on the show. There will always be people to say, ‘Yeah! You tell ’em!’ But tell ’em what? ‘[expletive] off’ isn’t a stance. It’s a tantrum.”

Gervais, who hosted this year’s event took to Twitter to respond to the criticism over his speech, sharing a photo of himself smiling as he hosted the awards ceremony.

“How the [expletive] can teasing huge corporations, and the richest, most privileged people in the world be considered right wing?” he wrote.

It is not clear if Gervais’s post was a direct response to the earlier one by Harris.

Previously, the comedian had thanked fans for their support over his opening monologue and admitted he was relieved this year’s ceremony was over.

“Thanks for all your amazing comments about my Golden Globes monologue. Best reaction ever and that means a lot to me,” he wrote.

“I had a blast but thank [expletive] it’s over, so I can get back to my real job of editing #AfterLife2 and touring #SuperNature. Make Jokes, Not War.”

During his eight-minute opening monologue at the event, which took place on Jan. 4, an unapologetic Gervais took aim at celebrities in attendance over their alleged friendship with convicted sex offender, Jeffrey Epstein.

“I know he’s your friend but I don’t care. You had to make your own way here in your own plane, didn’t you?” he said.

The writer and director opened his speech by referencing actress Felicity Huffman and her imprisonment for a college admissions scandal involving her daughter.

“I also came here in a limo and the license plate was made by Felicity Huffman,” he joked.

The former star of the BBC’s “The Office” criticized Hollywood figures for advocating certain causes but turning a blind eye to the companies that pay them, singling out Apple while its CEO Tim Cook sat in the audience.

“Apple roared into the TV game with ‘The Morning Show,’ a superb drama about the importance of dignity and doing the right thing, made by a company that runs sweatshops in China,” he said.

“Well, you say you’re woke but the companies you work for in China—unbelievable. Apple, Amazon, Disney. If ISIS started a streaming service you’d call your agent, wouldn’t you?”

Elsewhere in his speech, Gervais jokingly accused the Hollywood Foreign Press Association, which decides who win the coveted Golden Globes awards, of being “very, very racist.”

Concluding his speech, the comedian told this year’s winners that they should avoid talking about politics when making their acceptance speeches as they are “in no position to lecture the public about anything.”

“You know nothing about the real world. Most of you spent less time in school than Greta Thunberg,” he said, referencing the 17-year-old Swedish environmental activist.

Despite his advice, some of the speakers and award recipients at this year’s event, including actors and actresses Russell Crowe, Patricia Arquette, and Michelle Williams, were still vocal in sharing political messages.

Arquette said the United States was “on the brink of war” with Iran and urged the audience to “vote in 2020,” but did not endorse a specific candidate.