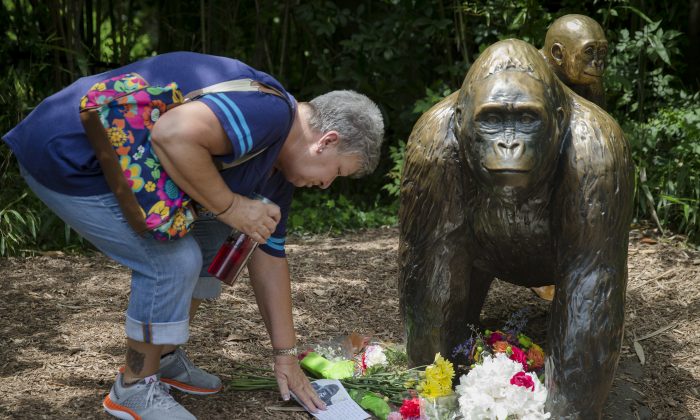 Eula Ray, of Hamilton, whose son is a curator for the zoo, touches a sympathy card beside a gorilla statue outside the Gorilla World exhibit at the Cincinnati Zoo & Botanical Garden, Sunday, May 29, 2016, in Cincinnati. On Saturday, a special zoo response team shot and killed Harambe, a 17-year-old gorilla, that grabbed and dragged a 4-year-old boy who fell into the gorilla exhibit moat. (AP Photo/John Minchillo)
US

Celebrity and comedian Ricky Gervais has joined in the thong of criticism directed at the Cincinnati Zoo, whose staff killed a silverback gorilla to save a boy who had fallen into the animal’s enclosure.

The zookeepers shot the gorilla after it was seen dragging the boy around in the water, though some witnesses said that the animal had been friendly.

It seems that some gorillas make better parents than some people.

Gervais also retweeted a message that said that the gorilla had been “protecting” the child.

The killing of Harambe has been protested by animal rights activists, and Gervais is a prominent one, having spoken out against trophy hunting.

Gervais has been joined by other celebrities like Queen guitarist Brian May in the criticism of the zoo.

Why was this Gorilla murdered ? No trial – no reason. No excuse. Who will prosecute ? Bri https://t.co/g1baEqwojC

Some animal rights activists blamed the zoo for making the enclosure area not secure enough, as the fence is only three-feet high. Zookeepers said they’re looking to make possible changes to the fence.

The zoo has defended its decision to kill the gorilla, and the zoo director said that he would make the same decision again given the chance.

The gorilla had been seen grabbing the child, and some zoo officials said that the gorilla could have easily crushed the boy to death if not for the zoo’s intervention.