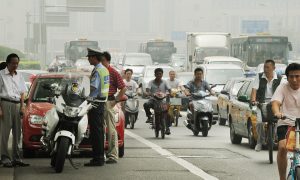 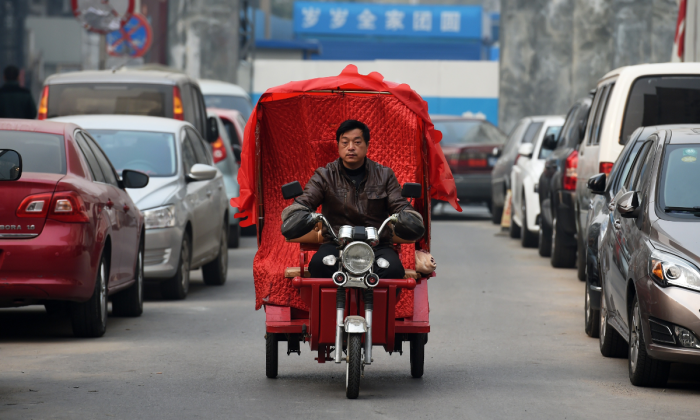 Rickshaw Driver Runs Red Light, Gets Knocked to Ground From Accident, Chases After His Own Vehicle

A rickshaw driver ran a red light and crashed into a car at an intersection. The driver of the motorized rickshaw was thrown to the ground, but quickly got up, and chased after his vehicle as it kept running, eventually crashing into the car once more.

The video was posted to Weibo, China’s version of Twitter, on March 11. The actual traffic accident occurred on June 5, 2018, according to a date imprinted in the video.

The footage is most likely taken from traffic cameras. The city is undisclosed, though the intersection of the accident was East Station Road and Xiaxing Boulevard.

In the 12-second video, a motorized rickshaw is seen running a red light at an intersection. A dark gray sedan and a large blue truck are passing through the green light.

Both the sedan and the truck stop in the middle of the road, but the rickshaw continues running without its driver. Surprisingly, the driver stands up and starts chasing after his rickshaw.

The rickshaw keeps driving while making a wide left turn. The man continues his chase.

The truck then continues moving forward when there is nothing in its way. The sedan driver steps out of his car, looking back at the rickshaw. The rickshaw with his driver in tow appear behind the truck, on a collision course with the car for a second time.

The rickshaw slams into the back of the car, pushing it away from the driver.

Both of the men then begin chasing after their runaway vehicles.

In China, vehicles that do not have combustion engines are not required to have license plates. A large number of electric vehicles, including the rickshaw, take advantage of this.

Some drivers with vehicles that have non-gasoline engines will readily ignore red lights since traffic cameras can not effectively catch them. Some of these vehicles include the motorized rickshaws, which are also called “three-wheel-vehicles.”

Police will often not stop these individuals who run red lights. Cars are often caught by traffic cameras, so the drivers much less frequently run red lights.

Some Chinese people take advantage of the way the police handle traffic accidents. A phenomenon known as “breaking porcelain” has emerged in modern china: This is when a person falsifies an accident in hopes of exploiting money from drivers. This scam works because in most cases the driver of the vehicle would have to pay expensive hospital fees on behalf of the victim, whether they are injured or not.