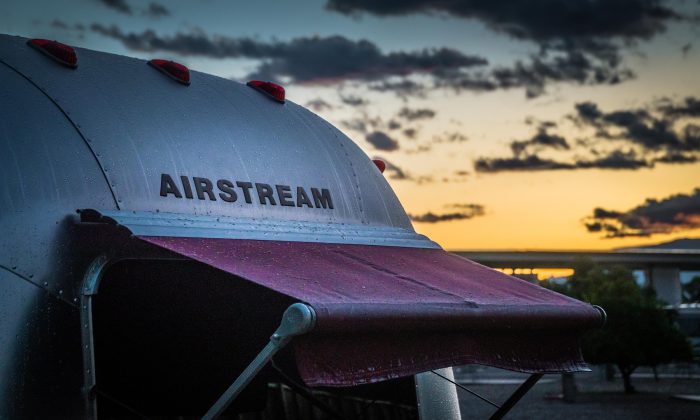 Talk about a ropey repair job.

“Only in East Side San Jose,” exclaims a man who caught an exceptionally rickety RV on camera in California.

“What the hell’s going on here?” he then asks.

The vehicle appeared to be held together by bungee cord as it barely rolled along McKee Road.

The men traveling behind the ramshackle vehicle that appeared to be on the verge of falling apart laugh as they film the RV rumbling along, scraping the pavement.

‘There’s sparks and [expletive] coming out from underneath it,” one of the men is heard saying.

The battered motorhome was spotted at traffic lights on North Jackson Avenue, before making a left turn.

The men followed the white RV along McKee Road filming it as it drove down the road, with other drivers giving it a very wide berth.

The vehicle’s back appeared to be on the verge of falling off, with a large split along the corner.

Attached to the rear panel was a spare tire rim, with the tire missing.

The side door also seemed about to fall out of its frame.

The footage shows what appears to be bungee rope holding the dilapidated construction together.

The men recording the footage watched in disbelief, and at a certain point the driver behind the wheel of the jalopy hit the gas and accelerated away.

Perhaps surprisingly, one repair material that was not visible on the vehicle was duct tape. According to the video below, it can be an astonishingly brawny mending material.