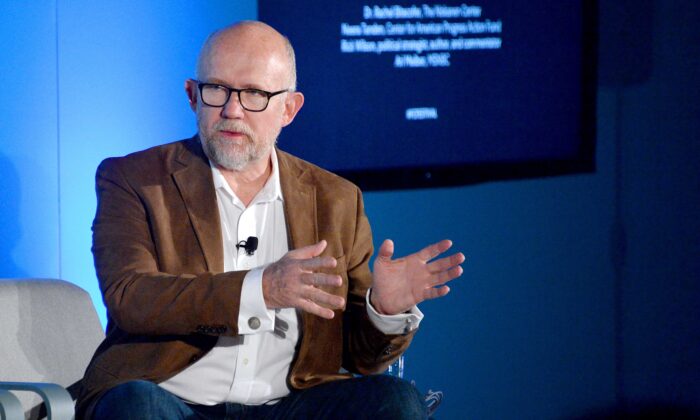 In case you missed it (and you probably did because who watches CNN anymore?), former Republican strategist Rick Wilson recently casually demeaned the tens of millions of Americans who support President Donald Trump.

Appearing on Don Lemon’s show, Wilson warmed up by saying that the Orange One “couldn’t find Ukraine on a map if you had the letter U and a picture of an actual, physical crane next to it.” Pretty thin gruel, but it seemed to amuse Lemon, who collapsed in laughter.

Encouraged, Wilson perhaps revealed more of his true feelings than he intended. “He knows that this is, you know, an administration defined by ignorance of the world. And so that’s partly him playing to their base, playing to their audience. You know, the credulous boomer rube demo that backs Donald Trump.”

And, to top off that performance, Wilson broke into his version of a hillbilly accent in order to demonstrate how stupid the “credulous boomer rube demo” truly is.

Wilson is entitled to his opinions, no matter how ill-informed, but I’m not moved to try to out-snark the man. I’d rather introduce myself to him, because whatever research methods he’s using to identify and attempt to classify supporters of this president are clearly faulty. Rick: there are tens of millions of people just like me who don’t fit into your simplistic view.

I’m a boomer, but I fancy myself neither credulous nor a rube. I graduated from an actual, accredited university with a degree in chemistry. I’m a recognized expert in my field (air quality science and emission measurement); I’ve testified before Congress and published scores of commentaries and even a few books. In my 35-year career I’ve had the pleasure of traveling across the country and around the world, working with more good, hard-working people at more factories of all sorts than anyone I know this side of Mike Rowe.

Not only could I find Ukraine on a map, I could also find Belarus, Andorra, San Marino, Senegal, Lesotho, Bhutan, and the Sultanate of Brunei. I not only know where French Guiana is, I know that it’s treated as an administrative region of France, not as a territory. French Guiana is, in other words, French soil every bit as much as Normandy or Picardy.

I tell you this Mr. Wilson because you’re woefully mistaken when you dismiss supporters of this president out of hand. I’m sure there are some rubes and fools among us, but the same is equally true of the other side.

The vast majority of the people who support President Trump are hard-working Americans who are smart enough to recognize that the cancer of the ruling-class mentality has infected large swathes of our government. We believe that if the price to pay to root out that cancer is some cringe-worthy Tweets and off-the-cuff remarks by the Chief Executive, it’s a cheap price, because the man gets results.

We’re not racists and we don’t listen for “dog whistles.” When candidate Trump says that maybe some of the people crossing the border illegally aren’t the best sort of people, we don’t hear “brown people are scary,” we hear “our border security blows.”

We’re the people who work hard to make America great and to build our families at the same time. We’re color-blind, because when you’ve been part of a team sweating in a factory or solving a problem in the real world, the last thing you have time for is prejudice. Talent, effort, and creativity know no gender, no race, no religion.

We’re America’s farmers, too, so routinely dismissed by the ruling class and mainstream media as another sort of rube. But no one who understands little more about agriculture than the basics, as is the case for this city boy, would make so foolish a mistake. Few fields of endeavor combine the challenges of financial management, technological acumen, and good old-fashioned elbow grease as does farming.

In parting Mr. Wilson, I note that you have taken credit for a GOP resurgence during your tenure as a strategist for the party. Assuming that you helped elect more Republicans, I can’t help but wonder what sort of Republicans they were. History tells us that a party can compromise its principals for a time and make some short-term gains by moving to a mushy middle. Such strategies rarely last beyond the next crisis, and I believe that’s why the “Never Trump” movement failed and will continue to fail within the party.

Three time British Prime Minister Stanley Baldwin was, by all accounts, a fine fellow, and under his leadership Tory governments made great strides in the twenties and thirties. Yet, he did so by stripping the party of its soul, nearly leading Britain to disaster. It appears to me that the Rick Wilsons and the Rich Lowerys and the Mitt Romneys are the Stanley Baldwins of today. As such you will become ever more irrelevant as an electorate far wiser than you could ever imagine asserts itself once more.