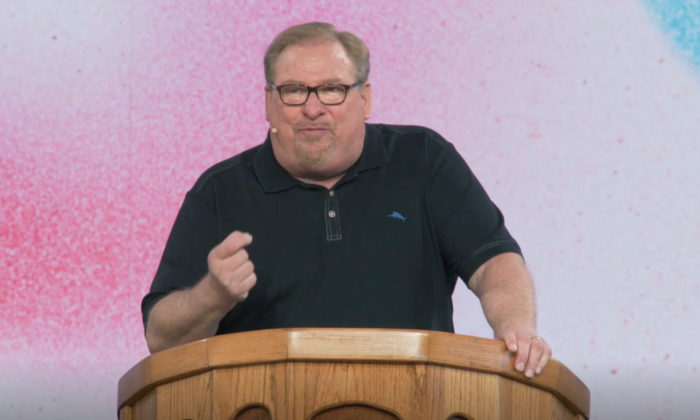 Pastor Rick Warren would walk to the light wood-colored pulpit Aug. 28 to preach his last sermon as Saddleback Church’s senior pastor, a position he has held for over four decades.

“Have I told you lately that I love you?” Warren said at the beginning of the sermon.

“As you know by now today is my last message to you as your senior pastor for 43 years and it has been my message to love you, pray for you, to serve you, encourage you, to be at the bedsides, to be at the gravesides, to be in counseling when you are getting through a tough patch in your life, and to teach you,” he said.

Warren founded Saddleback Church over four decades ago after launching it on Easter Sunday 1980, with a crowd of about 50 people in a rented space at the Laguna Hills High School in California, just one year after graduating from Baptist Theological Seminary of Fort Worth, Texas.

But this Sunday, Warren would re-preach that sermon to a congregation of more than 40,000 in physical and online attendance throughout the world, many of which were wearing Hawaiian-style shirts which he often wore during sermons.

“Pastor Rick’s sermon was the exact same one he gave when Saddleback first opened,” Kim Offhaus, an Orange County-based data analyst, told The Epoch Times. “He was just 25 years old at the time and the overpowering thought I had while listening to it was that he had such passion and insight of the scriptures and foresight of how to grow a church at such a young age.”

Like other church members who had been at the church in the early days, both Rick and his wife Kay had a profound impact on Offhaus’s life, she said.

“As I reflected about him retiring, tears streamed down my face during the service, and I had to stop myself before I had an ‘ugly’ cry moment thinking about the impact they made on my family and I,” Offhaus said.

“On Mother’s Day 2006, sitting in the worship center,  I heard Kay speak about the plight of the orphans and how there were so many children in the world who didn’t have a mom or a dad and ‘Saddleback families, some of you need to adopt.'”

After Offhaus, her husband, and three children processed the idea of adoption, a year later they adopted the family’s youngest son from Vietnam.

“I am confident if it hadn’t been for Rick and Kay, we would not have our amazing son and our lives would be missing such a precious part of our family. “It honestly brings tears to my eyes.”

It was after Warren’s seminary school graduation in 1979 when he said he felt led by God to start a church in South Orange County, which at the time was one of the fastest growing communities in the United States.

With no money, building, or even members, Warren went door to door to discover the needs and interests of their unchurched neighbors.

“When he came to California with this U-Haul, he pulled into the parking lot and spoke with a realtor who was responsible for that area and basically said ‘hey, I just got here and I’m going to start a church and we need a place to stay,” Saddleback Church Market Director Matthias Walther told The Epoch Times. “The realtor, Don Dale, just laughed. … Rick told him that he would be the first member of his church, to which he was.”

By 1992, the church moved from the high school to the launching of the 72-acre Lake Forest site where it stands today. About 6,000 parishioners were in attendance during the open-air service on that day in the Foothill Ranch neighborhood of Lake Forest, California.

Now with a worldwide church audience of over 40,000 people at various church campuses across the United States and the world, Saddleback staff and members prepare for Warren’s replacement as he spends his retirement working through health complications associated with spinal myoclonus, a condition that causes muscle contractions.

It was several months back when Pastor Andy Wood, 40, of Echo Church in San Jose, Calif., was named Warren’s successor.

Among a group of about potential 100 pastors to lead the church, Wood was chosen by Warren after hearing him speak at Saddleback as a guest pastor, “preach[ing] a message tailored to the audience, and when Rick saw that, he said, ‘that’s the kind of guy I like,'” Walther said.

Since starting Saddleback Church, Warren has said that he has preached over 6500 messages as the church’s leading pastor.

“In every generation, [God] raises up new voices, and new leaders, so I know without a shadow of doubt in my heart, that sitting in this crowd right now, there are some young women that God wants to use in mighty ways; and I know there are some young men sitting here right now listening to me that God wants to use like he used me,” Warren said at the end of his final sermon.

“I’m going to tell you this: there is no greater joy, no greater feeling, and there’s no greater pleasure in life than the feeling of being used by God for a purpose greater than yourself,” he said.

Soon after praying a benediction for the thousands of members of the audience from the pulpit, Warren lifted his hand saying “I love you” before walking off stage.

“God bless you guys,” Warren said, as the audience applauded him and a final worship song began.

Wood’s first official message as Saddleback Church’s lead pastor comes Sept. 11, and can be viewed in person and online on the church’s website.