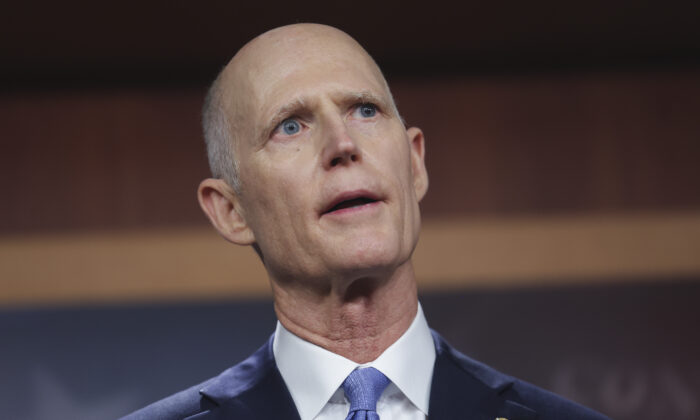 Scott opposes purchase of Chinese goods, while DeSantis argues US economy should serve the nation
By Nathan Worcester

Sen. Rick Scott (R-Fla.) and Florida’s Gov. Ron DeSantis have warned of the danger of economic dependence on China at the National Conservatism Conference in greater Miami.

“We should never buy a product that comes in a box that’s made in China. If we do, send it back,” Scott said.

Scott made the comments during a Sept. 11 interview with EpochTV’s Jan Jekielek.

Jekielek pointed out that a large percentage of products sold in America are manufactured in China, making it difficult for people to avoid purchasing Chinese goods entirely.

The Epoch Times has reached out to Scott to see if he has taken any personal steps to stop buying goods from China.

Concern over China has been a major theme during the conference.

An entire panel was dedicated to “The Challenge of China,” during which experts Elbridge Colby, David Goldman, and Gen. Robert Spalding debated the right approach to an ascendant and aggressive Middle Kingdom.

Scott and Jekielek also commented on the anniversary of 9/11. Scott reflected an enduring lesson from the attack: the United States has enemies.

“There’s people that hate this country around the world, and we’ve got to start standing up for this country,” Scott said.

Scott questioned the admissions of refugees from Afghanistan who were not all fully vetted, in line with the conclusion of a recent report from the Department of Homeland Security’s Inspector General.

“We’ve got to be way more careful about making sure we don’t have another terrorist attack in this country,” he added.

During a lengthy keynote address on Sept. 11, DeSantis elaborated on the harmful effects of admitting China to the World Trade Organization and granting it most favored nation status.

He argued that the corporatism of establishment Republicans helped fuel that country’s rise at the expense of the American people.

“Corporatism is not the same as free enterprise. I think too many Republicans have used ‘limited government’ to basically mean whatever is best for corporate America,” he said.

“The United States is a nation that has an economy, not the other way around, and our economy should be geared towards helping our own people.”

COVID-19, he said, revealed the economic and geopolitical risks of entanglement with China.

DeSantis also discussed his response to that crisis, which distinguished him from many Democrats and Republicans alike.

“It is said that our federalist system creates laboratories of democracy, where different states can approach things in different ways. But I don’t think we’ve ever seen such sharp contrasts between different governing philosophies as we have in the last few years,” he said.

DeSantis explained his decision to go a different way than some other governors with an overlooked quotation from President Dwight Eisenhower.

While many know Eisenhower’s warning about a military-industrial complex, he also warned that the country’s policy-making could end up dominated by a “scientific-technological elite.”

DeSantis pointed out that Florida has gained in both population and adjusted gross income since COVID-19. Republican voter registration has also surged in the state.