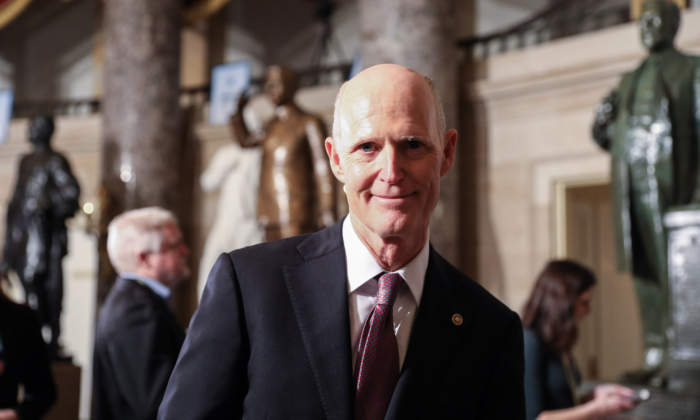 Sen. Rick Scott (R-Fla.) called for an amendment to the Constitution to raise the House voting threshold to approve articles of impeachment, a day after President Donald Trump was acquitted by the Senate.

Scott made the announcement on Feb. 6 with the aim of making it more difficult for presidents to be impeached, saying that the United States “should never again have to suffer from this partisan hackery.”

His Constitutional amendment would require a super-majority vote of three-fifths in the House of Representatives in order to approve articles of impeachment, instead of the current threshold of a simple majority.

After the partisan charade by @SpeakerPelosi & House Dems, I’m introducing a constitutional amendment that raises the threshold to approve articles of impeachment in the House to 3/5 Super Majority vote.

Our country should never again suffer from a partisan impeachment process. pic.twitter.com/B44WZcB8Pl

“An act as divisive as impeachment must have bipartisan backing and overwhelming support. It should be harder—much harder—for either political party to take the process our Founders created as a last resort against a tyrannical leader and use it instead as a tool for the tyranny of a political majority,” Scott said in a statement.

“I look forward to all of my colleagues, on both sides of the aisle, joining me in this effort to protect the integrity of our nation and our constitution.”

Trump was acquitted by the Senate on both articles of impeachment on Wednesday, ending the third impeachment trial in U.S. history.

The senators voted nearly along party lines to acquit the president of the two charges against him: abuse of power and obstruction of Congress. The senators voted 52-48 on the first article of impeachment and 53-47 on the second article.

Trump’s campaign on Wednesday issued the president’s first official response after he was acquitted, arguing that Trump had been vindicated after months of impeachment fervor.

“Trump has been totally vindicated and it’s now time to get back to the business of the American people,” said Trump campaign spokesperson Brad Parscale in a statement.

Scott described the impeachment process a “partisan charade” carried out by House Speaker Nancy Pelosi and House Democrats, which “realized” the “fears of our Founding Fathers.”

“They warned that impeachment could be used as a partisan tool by partisan actors,” he said.

“The Democrats used the impeachment process as a tool to hurt President Trump, regardless of the outcome of the Senate trial. It’s a dangerous precedent and the process has to change.”

Scott’s amendment must receive approval from two-thirds of the House and Senate, and ratification from three-fourths of all states, or 38 out of 50.