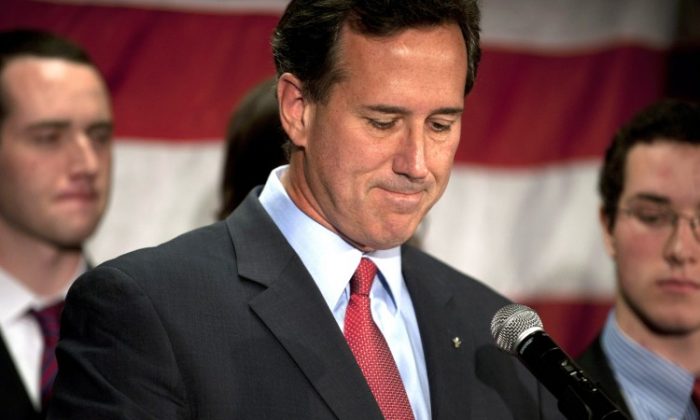 Surrounded by members of his family, Republican presidential candidate, former Sen. Rick Santorum announces he will be suspending his campaign during a press conference at the Gettysburg Hotel on April 10 in Gettysburg, Pa. (Jeff Swensen/Getty Images)
US

Former senator Rick Santorum bowed out of the GOP race Tuesday, ensuring Mitt Romney will be the 2012 Republican Presidential nominee.

Speaking from Gettysburg, Pa., with his wife and children behind him, Santorum said the decision had been a family one.

“We made a decision over the weekend, that while this presidential race for us is over, for me, and we will suspend our campaign effective today, we are not done fighting.”

The former Pennsylvania senator had been Romney’s main opponent, winning 11 states all up, but had encountered a series of losses including most recently Wisconsin, Maryland, and the District of Columbia.

Santorum had also been forced to cancel campaigning Monday and early Tuesday as a result of his daughter Bella’s illness. Bella has a rare genetic condition, trisomy 18, and was taken to hospital over the Easter weekend.

Santorum said it had been “a difficult weekend” but Bella was a “fighter.” He confirmed she was back home and “doing exceptionally well.”

He said he was “looking forward to spending a lot of great time with her.”

Santorum said it was he who had announced ‘game on’ after winning the Iowa caucuses and now expects there will be those writing ‘game over’ on his announcement.

“But this is a long, long way from game over,” he said, “We are going out there to fight to beat President Obama, win the House and take the Senate back.”

Romney issued a statement commending Santorum and his campaign.

“He has proven himself to be an important voice in our party and in the nation,” Romney said. “We both recognize that what is most important is putting the failures of the last three years behind us and setting America back on the path to prosperity.”