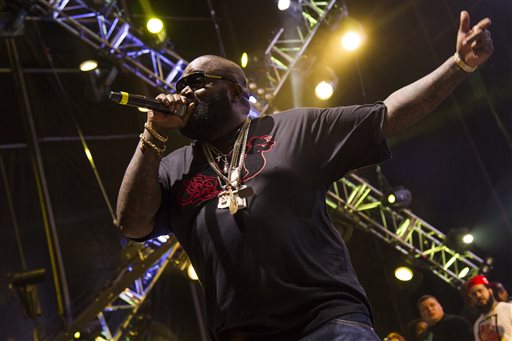 Rick Ross Pears Hoax: ‘In Emergency Room After Eating Too Many; Suffers Stomach Rupture’ is Fake

Rick Ross didn’t head to the emergency room after “eating too many pears.”

A fake report on Huzlers.com says otherwise, however. Huzlers is a satirical website that shouldn’t be taken seriously.

The crudely worded article says: “Rick Ross seems to have ignored his brains’ signals to stop eating pears before rupturing his stomach and collapsing of the intense pain and damage. Rick Ross has been prohibited from eating pears for the next month due to high amounts of fiber and sugar in his body.”

According to a disclaimer, Huzlers is bogus.

“Huzlers.com is a combination of real shocking news and satirical entertainment to keep its visitors in a state of disbelief,” it reads.

A video of Ross recently went viral, with him autographing a pear for a fan.

“I still eat the way I want to eat, I just go to the gym,” Ross told Tim Westwood TV. “Now they give me fruit to eat. I eat pears.”

“You could be doing something that’s burning calories and building muscles at the same time,” he said.

He also talked to GQ about his diet while traveling.

“Actually, when I’m traveling, I’m going to stick to my diet perfectly. I know I’m going to have a lot of water, a lot of fruit, a lot of pear. When I’m somewhere exotic I know I’m not enjoying the food there as much as home,” he said.