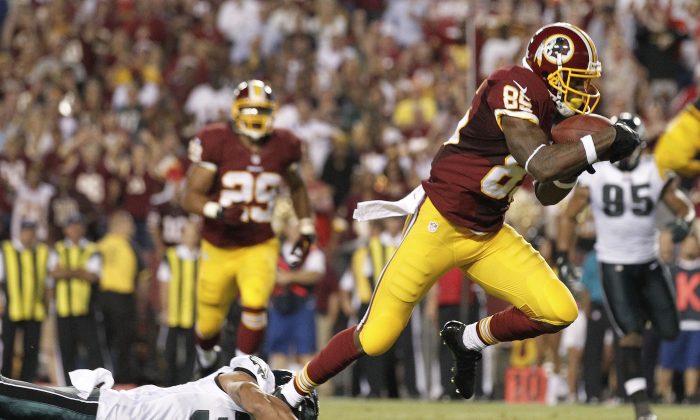 Washington Redskins wide receiver Leonard Hankerson, right, breaks a tackle by Philadelphia Eagles cornerback Jordan Poyer as he heads toward the end zone for a touchdown during the second half of an NFL football game in Landover, Md., Monday, Sept. 9, 2013. (AP Photo/Alex Brandon)
NFL

Rick Reilly, the ESPN commentator, apparently misquoted his father-in-law, Bob Burns, a Blackfeet Elder, on a column in defense of the Washington Redskins name.

Burns wrote in Indian Country Today Media Network: “My son-in-law, ESPN’s Rick Reilly, completely misunderstood the conversation we had, quoting me as saying ‘the whole issue is so silly. The name just doesn’t bother me much. It’s an issue that shouldn’t be an issue, not with all the problems we’ve got in this country.’”

He said that “it’s silly in this day and age that this should even be a battle — if the name offends someone, change it.”

Burns added that the term “redskins” is demeaning towards Native Americans and “historically is insulting and offensive, and that I firmly believe the Washington Redskins should change their name.”

In recent months, there has been an increase in the number of calls to change the Redskins name.

Last week, President Barack Obama chimed in, saying he would change the name if he were in charge. Sports columnists like Sports Illustrated’s Peter King have also stopped using the name Redskins in their articles.