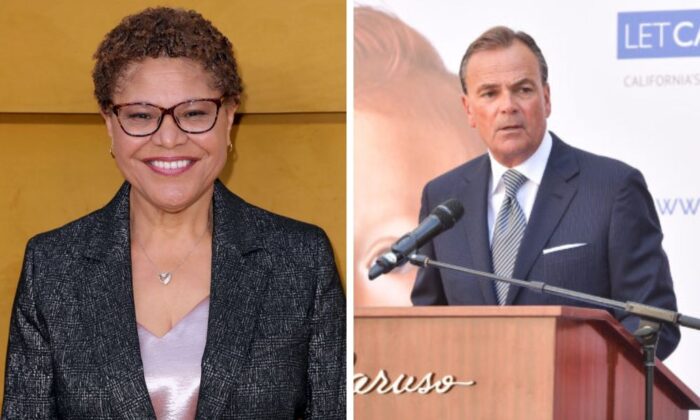 The two candidates faced off Sept. 21 during their first televised debate ahead of the Nov. 8 election at the Skirball Cultural Center.

Homelessness was discussed at length during the one-hour debate, which was moderated by Fox11 anchor Elex Michaelson, L.A. Times columnist Erika D. Smith, and Univision anchor Gabriela Teissier. According to polls conducted by the Los Angeles Times earlier this year, it is the top issue voters want leaders to tackle more aggressively.

Bass and Caruso agreed on the seriousness of the issue but differed on how to combat it. Caruso vowed to build 30,000 new shelters, while Bass argued shelters do not work.

“What we have done for too long is we have put people in shelters,” Bass said. “Now the shelters have become so dangerous, people don’t even want to be in the shelters and are choosing to be outside on the street.”

Caruso said shelters are a more efficient way to “meet people where they’re at” to provide resources, rather than outreach efforts conducted on the streets.

“If you give services on the street, you just create the circle that we have and the problem continues to get worse,” he said.

“His plan just calls for shelters … but you have to move people into permanent supportive housing, and then you have to mainstream them out of that,” she said.

Regarding rising crime rates, Fox 11’s Michaelson referred back to a previous debate during the June primary when candidates were asked, on a scale out of 10, how safe they felt in Los Angeles. At that time, Bass’s response was a “10” meaning she felt free from danger.

Recently, Bass’s home was burglarized, and two guns were stolen. Michaelson asked if that has caused her feelings to change.

“I was making a reference to my neighborhood where I felt safe because of measures I personally took and also measures that were taken by my neighborhood,” Bass said. “Obviously, they failed. So, my sense of safety was shattered. If I had to grade [my feelings now], I would grade it as a five.”

Caruso touted his experience as president of the Los Angeles Police Commission from 2001 to 2005 as evidence he could turn the numbers around. The latest crime stats—with homicides, robberies, and violent crime all up by double digits compared to 2020—are a matter of “life and death,” he said.

“We’re trying to dig our way out of a hole, we’ve got to change,” Caruso said. “There’s a clear difference between the congresswoman’s plan and mine. My experience being a police commissioner working with LAPD [Los Angeles Police Department] and the leadership there, I dropped crime 30 percent with the team there.”

Bass said she is in favor of cracking down on crime by hiring more LAPD officers and increasing the department’s budget to hire between 200 to 400 officers during any given month.

“At the same time, I believe in stopping crime today but preventing crime tomorrow and investing heavily in crime prevention strategies,” she said.

“We have to strip away unnecessary regulation, I know how to do that,” Caruso said. “People aren’t building, that’s why affordability is so upside down.”

Bass agreed regulations need to be slimmed down and the process streamlined for developers.

“One of the things that I would do immediately for anybody that wants to come and build housing, specifically for the homeless population … I would say you don’t need to go to the front of the line, we need to have a completely separate line for you,” she said.

While both candidates are Democrats, Caruso was a registered Republican in 2016, an Independent in 2019, and re-registered as a Democrat prior to entering the race.

Bass has been a long-standing Democrat and currently represents California’s 37th district. The congresswoman has a lengthy portfolio in politics and served six years on the California State Assembly between 2004 and 2010. Two of those terms were served as speaker.

Caruso is known for his lavish properties across Los Angeles, including the Grove, the Americana at Brand, and the Commons at Calabasas. In addition to serving as president of the Police Commission, he also was on the board for the L.A. Department of Water and Power, and chair of the USC Board of Trustees before resigning to run for mayor.

Bass and Caruso were the two frontrunners elected in the June primaries competing to replace soon to be termed-out Mayor Eric Garcetti after five and a half years in office.

Vote-by-mail ballots are mailed to all active registered voters no later than Oct. 10, 2022.