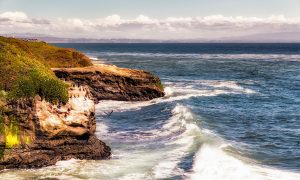 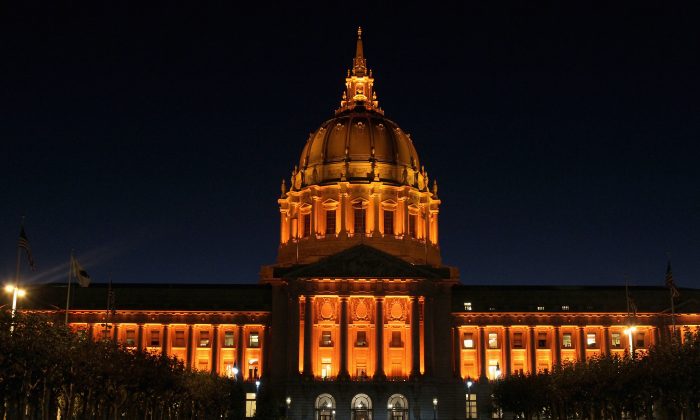 San Francisco city hall is seen illuminated with orange lights in honor of the San Francisco Giants winning the major league baseball National League Championship and advancing to the World Series on October 25, 2010 in San Francisco, California. Ritchie Greenberg seeks to serve as San Francisco’s mayor, should the voters choose him in a special election on June 5, 2018. (Justin Sullivan/Getty Images)
Northern California

Crime and homelessness are the major problems facing San Francisco, according to mayoral candidate Richie Greenberg.

San Francisco is plagued with a crime rate 117 percent higher than the national average. A recent NBC investigation found parts of the city to be dirtier than the slums of some developing countries.

Greenberg is one of eight candidates, and the only Republican, running in the June 5 special election for San Francisco mayor. He sat down with The Epoch Times to discuss his vision for cleaning up the city he’s lived in and loved for 17 years.

“Three years ago, I started to think about wanting to make a change, a difference in the city. I’ve been very lucky to live in San Francisco, but I started seeing problems and became very concerned,” he said.

One issue that he feels needs immediate attention is the high number of homeless people living in San Francisco. Second only to New York City in homelessness, San Francisco has 795 homeless per 100,000 people.

Problems stemming from having such a large homeless population include streets littered with feces, urine, and used hypodermic needles—all major health hazards to residents and visitors alike.

Greenberg is so concerned with the issue of homelessness that, if elected, he has vowed to declare a state of emergency and get the homeless into emergency shelters within days of being sworn in.

His plan will bring several hundred FEMA-style mobile homes to strategic areas of San Francisco’s east side for those currently living on the streets. In addition, each individual will have access to support services such as counseling, clinics, urgent care physicians, and addiction specialists based on their needs.

“The city’s leadership has let this crisis go on for far too long. It’s affecting our citizens and visitors alike, our overall morale, and I intend to immediately improve living conditions for all parties involved, within literally days of being sworn in as mayor,” Greenberg said.

In addition, he would conduct an audit of every homeless outreach agency in the city.

“We’re spending hundreds of millions of taxpayers’ money on homelessness,” Greenberg said. “As mayor, I will demand that we have accountability measures and goals for each and every department or organization that receives funds from us. We hear about monies unaccounted for. Where did it go? We don’t know, and that’s a problem. I do not want to continue giving money to organizations if they can’t account for how they are spending that money.”

He believes this will make a big difference, resulting in better services for the homeless.

“There will be much less money given to organizations that are not being effective. It will become competitive to see who can do the most with their money,” he said.

He also sees a city in dire need of more police support.

“The police department is very important to many aspects of the city—public safety, public health, tourism, and enforcement of laws. We need police, and we need to support them and increase their numbers.”

After speaking with the head of the San Francisco Police Officers Association, he believes the city needs to hire 400 more officers.

Referring to the epidemic of auto break-ins—San Francisco reported 30,000 of them in 2017—he said, “This is one of the reasons we see a tremendous number of break-ins, because there aren’t enough officers on the streets.”

Addressing the housing crisis is also high on his list of priorities. In his “Contract with San Francisco,” he has listed measures he will take if elected.

First, he strongly believes that San Francisco needs to build more units with one, two, or three bedrooms. The trend lately has been to build mostly micro units that are meant for one person.

He believes building larger units is vital to keeping families in the city.

“We have families that need housing. We need two- and three-bedroom units. Many people in San Francisco don’t care about families. That’s what is pushing families out,” Greenberg said.

Another step he would take toward easing the housing crisis is to open the Presidio park and land owned by the San Francisco Unified School District for teachers and first-responder priority housing.

Greenberg has worked as a business consultant for the past 17 years. Through this, he has gained a deep appreciation for the importance of small businesses to San Francisco.

“Small business is part of our fiber—they’re part of San Francisco,” he said.

He’s concerned to see so many failing.

“We see so many empty store fronts. I find very disturbing the number of laws and proposals by City Hall over the years that have hurt these small businesses,” Greenberg said.

“I want to find ways of [helping small businesses succeed], to make exceptions for small-business owners who want to open a new shop. We have to figure something out, because more and more businesses are leaving. Small, locally owned franchise chains and small independent businesses all need help,” he said.

Guided in his life by a strict code of ethics, Greenberg wants to bring these principles to the mayor’s office.

“I try to be very ethical. I’m not trying to impose my beliefs on others, but to be ethical and respectable is part of my religion, and I will bring that into the mayor’s office,” he said.

“As mayor, I will be accountable to the citizens of San Francisco. I will follow laws, and I will enforce the laws,” he said.

Greenberg is undeterred by the fact that San Francisco hasn’t elected a Republican mayor for more than 50 years. He considers himself “moderate in a city in progressive decline” and feels that many people are losing faith in the city’s “left and lefter politics.”

“Then, after 1964, Democratic mayors came in, and look at what we have now: uncontrolled homelessness, tremendous budget, understaffed police department, crime break-ins, drugs, on and on and on. So I say, let’s get back to quality. Let’s get back to prosperity, to accountability, and law and order.”