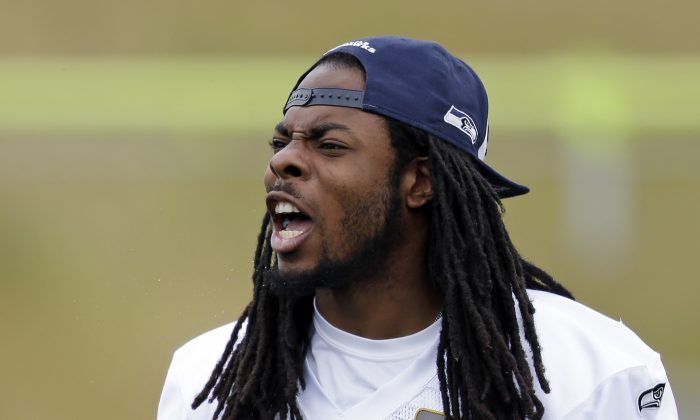 FILE - In this June 12, 2014, file photo, Seattle Seahawks' Richard Sherman yells during an NFL organized team activity football practice in Renton, Wash. Where he’s gone from being largely overlooked coming out of Stanford, to being one of the most polarizing figures in the NFL. There isn’t much of a middle ground with Sherman. He’s either loved for a style that borders on cockiness, or he’s despised for the same reason. (AP Photo/Elaine Thompson, File)
NFL

Seattle Seahawks cornerback Richard Sherman mocked the NFL during his weekly press conference with a cutout of receiver Doug Baldwin (voiced by him) on Tuesday afternoon.

Sherman addressed a number of topics, including the NFL’s decision to fine Seahawks RB Marshawn Lynch and its move to ban athletes from wearing Beats headphones in favor of Bose headphones.

He also took shots at the NFL’s media availability rules and forcing a team to play Sunday and Thursday.

The Seahawks will play the San Francisco 49ers on Thursday during Thanksgiving.

According to SBNation, Sherman also responded with “we don’t care” to a number of questions about the 49ers-Seahawks game. After the responses, he added, “That’s what happens when Marshawn gets fined.”

Lynch was fined $50,000 for violating the NFL’s media policy after the team’s loss against the Kansas City Chiefs during Week 11. He left the locker room without speaking to reporters but called two NFL Network journalists after that.

The league also handed down a $50,000 fine for another incident last year.

As a result, according to the Seattle Post-Intelligencer, the Seahawks’ locker room “was particularly icy last Wednesday, when Lynch spoke to media for the first time since the NFL slapped him with the fine. While Lynch dodged most questions for the better part of 10 minutes, several other Seahawks seemed just as unwilling to give interviews.”

“The guys that are complaining about Marshawn Lynch not talking are primarily reporters that are not in that locker room every day,” 710 ESPN Seattle radio host Danny O’Ne said last Thursday. “Most of the reporters — in fact, all the reporters — that are in there every day, at the beginning of this year decided, when Marshawn did his first interview where he had the music turned up, that we’re not going to go back, we’re not going to keep hitting it, that there’s no point for anybody.”