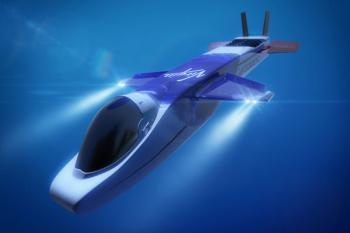 Virgin Oceanic's submarine is being heralded as the only piloted craft in existence able to navigate at full sea depth. (Virgin Oceanic)
Science

David Skoumbourdis
View profile
Follow
biggersmaller
Print
Founder of Virgin airlines Sir Richard Branson announced on Tuesday, April 5, that he will pilot the only craft in existence able to traverse the deepest parts of the world’s oceans.

The announcement is part of Branson’s latest venture called Virgin Oceanic, a scientific endeavor aiming to enable scientists to study life in deep-sea areas that have been previously inaccessible.

At the core of the operation is a submarine, an 8,000-pound titanium and carbon fiber construction designed to withstand the immense pressures of the deep seas. Measuring 18 feet long, the craft only has room for a single pilot who will see through a dome made from a single piece of quartz.

According to the Virgin Oceanic website, “The one-person sub has an operating depth of 37,000 feet (7 miles) and is capable of operating for 24 hours unaided. Once fully descended, the submarine’s hydroplanes (the equivalent of wings for submarines) and thrusters will allow it to ‘fly’ up to 10 km [6.2 miles] over the ocean floor while collecting video and data.”

The submarine will undergo several months of pressure testing before it’s deemed safe for Branson to take the helm.