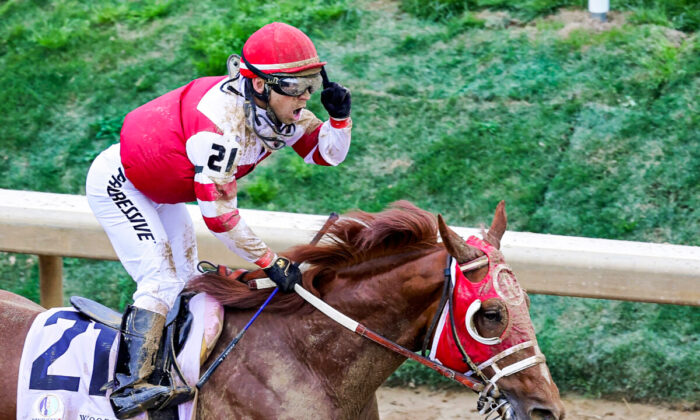 In one of the most unbelievable races in Kentucky Derby history, Rich Strike, the longest odds on the board, ran down favorite Epicenter and Zandon in deep stretch to win the 148th Kentucky Derby on Saturday.

The race started with Summer Is Tomorrow and Crown Pride going to the front with blistering fractions pf 21.48 seconds for the first quarter and 45.36 for the half. Messier was in a comfortable position right off the lead. By the head of the stretch Messier moved to the front as Epicenter made a bold move on the outside with Zandon not far behind.

All eyes at Churchill Downs were on the pair as Messier had clearly had enough. Then surging on the inside came the little known and respected colt Rich Strike, who blew past them to win the Kentucky Derby by three-quarters of a length.

The colt is trained by Eric Reed and ridden by Sonny Leon. Reed picked up the horse in that first Churchill race for $30,000 for owner Richard Dawson of RED TR-Racing.

This was thought to be one of the most competitive races in years with many storylines.

Perhaps one of the most intriguing was Taiba, a horse that had only run twice. The colt was moved from the barn of Bob Baffert to that of his former assistant Tim Yakteen. There was much speculation if the horse was facing too much, too fast.

And there was also much made about the trainer Steve Asmussen’s streak of 23 straight losses in the Kentucky. You have to be pretty good to get 23 starters. In fact, Asmussen is the sport’s all-time leading trainer for wins. Epicenter was the horse that was going to change all that. The streak is now 24.

Chad Brown, considered the best turf trainer in the country, was bringing morning line favorite Zandon to the race. But the winner of the Blue Grass hadn’t won the race in 36 years, now 37.

Trainers Todd Pletcher and Brad Cox each had three horses in the race.

The Triple Crown now moves to Pimlico Raceway in Baltimore for the Preakness Stakes in two weeks.