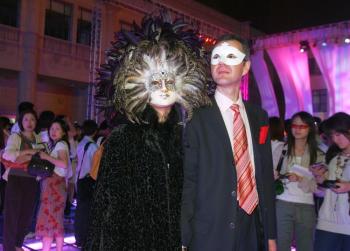 Performers walk the runway during the 2007 Millionaire Fair in Shanghai, China. The extravagant spending habits of China's 'rich second generation' are shocking to many people around the world. (China Photos/Getty Images)
China

By Shanshan Wu
biggersmaller
Print
Chinese media was recently abuzz with news of the extravagant spending on gifts and partying to celebrate the engagement of a young couple in China.

The bride’s engagement gift from the groom alone was 80 million yuan (approximately US$11.8 million), while her wedding dowry, which included a house and two luxury vehicles, was estimated to be 100 million yuan (US$14.8 million).

The groom, part of the “rich second generation” set from Beijing, and his bride were the honorees at a lavish engagement party at a renowned restaurant in Qingdao City, located in China’s northeastern province of Shandong.

The escort entourage included a 30-million-yuan (US$4.4 million) motorcade, which was led by a red Ferrari, followed by 43 luxury vehicles, including such models as the Porsche 911, Mercedes Benz SLK350, BMW Z4, Audi Q7, and BMW X5.

According to Qingdao News, the bride and groom were saluted at the restaurant by 21 gold cannons that shot out colorful streamers and rose petals. Employees explained that the 21 cannons were there to say “I love you.”

The extravagant spending habits of China’s “rich second generation," has shocked many people arround the world.

A Sydney Morning Herald report of April 3, 2010, said that in Australia, the growing trend of Chinese investors purchasing residential buildings en masse is stimulating the rising cost of housing in Australia.

Australian media has noted that a large number of Chinese at auctions have been mere students in their teens and 20s. (www.smh.com.au/national/chinese-whispers-theyre-driving-up-housing-prices-20100402-rjyf.html.)

At an auction in March in Camberwell, a suburb of Melbourne, Australia, a 19-year-old female Chinese student who could barely speak English purchased a three-bedroom house at the high bid of 1.82 million Australian dollars (US$1.6 million.)

A report on April 24 by the Australian newspaper The Age revealed that in 2008, Chinese oil-resources businessman Zeng Wei and his wife, Jiang Mei, paid AU$32.4 million (US$28.1 million) for a house in Point Piper, an eastern suburb of Sydney. Wei’s father, Zeng Qinghong, was vice-president of the People’s Republic of China from 2003 to 2008.

It was the third-most expensive home ever sold in Australia. (www.theage.com.au/business/hammer-falls-on-foreign-investors-20100423-tjcy.html)

The local media also reported that the couple planned to tear down and reconstruct the house for AU$5 million (US$4.3 million)—the most money spent for a residential home demolition and rebuilding project in the history of Sydney.

Cai Yongmei, the executive editor of Hong Kong’s Open Magazine, said to Radio Free Asia: “China’s luxuries reflect the drastic polarization of Chinese society. Those who have accumulated extreme wealth, including bureaucrats and the businessmen who rely on them, tend to flaunt their power by flaunting their luxuries.”

An Internet blogger commented that contemporary society in China is home to a large class of wealthy elites who are preoccupied with extravagant spending and flaunting their wealth. Through their actions, they disparage the poorer classes and provoke rich-bashing, with a negative impact on society.

Another Internet contributor said that if an average elementary school could be built for 300,000 yuan (US$ 44,274), then 100 million yuan (US$14.8 million) could build hundreds of elementary schools, providing education for tens of thousands of children.