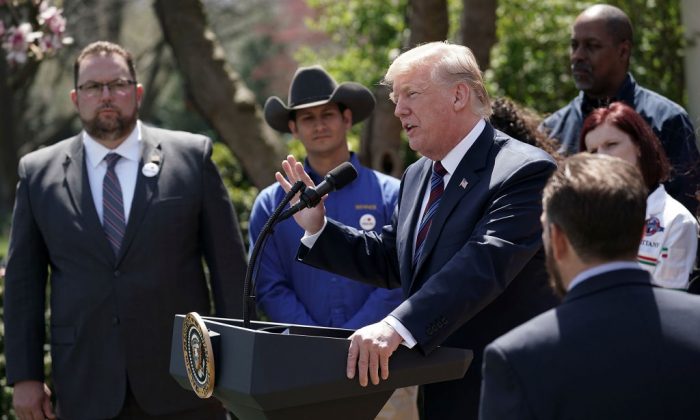 WASHINGTON—Democratic presidential nominee Joe Biden has pledged to raise taxes on people who earn more than $400,000 a year. He called the tax cuts of 2017 a “tax giveaway primarily for large corporations and the wealthy.”

However, 2018 tax payment data by the Internal Revenue Service (IRS) show that, as a result of President Donald Trump’s tax cuts, high earners paid more taxes to the federal government in dollar terms while the rest of the taxpayers paid less.

According to an analysis by political commentator Andy Puzder, tax payments by about 1.6 million individuals, or the top 1 percent of all taxpayers, increased by $16 billion in 2018 as a result of the Tax Cuts and Jobs Act (TCJA). He argued in a recent op-ed for Fox Business that the tax cuts didn’t disproportionally benefit high earners, as Biden has repeatedly suggested.

Puzder was a senior economic adviser to the Trump campaign in 2016 and authored the book “The Capitalist Comeback: The Trump Boom and the Left’s Plot to Stop It in 2018.”

The data suggested that taxes paid by the bottom 99 percent fell by $80 billion, as a result of the TCJA.

One reason high earners paid more individual income taxes is that their income rose in 2018. However, the data also showed that their tax liability rose faster than their incomes.

“That is at or near an all-time high of the share of income taxes paid by the top 1 percent,” economist and Epoch Times columnist Stephen Moore wrote in a blog.

“This is exactly what we expected would happen,” he wrote. “Going back to the 1920s (the Coolidge tax cuts), the 1960s (the Kennedy tax cuts), and the 1980s (the Reagan tax rate cuts) lower tax rates lead to more revenues and more taxes paid by the rich. The Trump tax cuts followed that pattern.”

Moore called Biden’s plan to increase taxes “a radical redistribution ideology that will make us all poorer.”

One of the reasons high earners’ share of the tax burden surged is that the TCJA limited the itemized deductions they were able to claim.

The amount taxpayers claimed for itemized deductions dropped to about $650 billion in 2018 from $1.3 trillion in 2017.

“Taxpayers across the income spectrum did see a lower effective tax rate. That’s true for both lower earners, and for higher earners,” Garrett Watson, senior policy analyst at the Tax Foundation, a nonpartisan tax policy group, told The Epoch Times.

“A lot of that has to do with the increase in the standard deduction and a reduction in the individual rates, though there are some countervailing effects for some taxpayers due to the limitation of the state and local tax (SALT) deduction, which raised marginal rates for a lot of folks at the top.”

Under the old tax code, individuals who itemized their deductions were able to deduct all their SALT against their federal taxable income. The TCJA, however, capped individual’s deduction for SALT payments to $10,000 a year. Any state and local individual income or property tax payments in excess of that amount are no longer deductible under the new code.

Some rich people saw their personal income taxes go up under the 2017 tax law because of the limit on deductions for SALT, however, Puzder’s analysis doesn’t reflect the full picture, according to Steve Wamhoff, director of federal tax policy at the Institute on Taxation and Economic Policy (ITEP).

“Cuts in the corporate income tax mainly help the well-off (who own most of the corporate stock) and the same is true of the estate tax, which only affects very wealthy families. Put all these changes together, and the vast majority of high-income people get a significant tax cut,” he told The Epoch Times in an email.

Biden has pledged to raise the corporate tax rate to 28 percent from 21 percent. Some tax experts including Watson believe that Biden’s tax plan could hurt lower-income taxpayers.

However, the indirect economic effect of any increase in the corporate tax rate should be considered as part of Biden’s tax pledge, according to Watson.

“We find, for example, in our modeling that a good portion of the after-tax income gains by those in the lower and middle-income quintiles can be attributed to the corporate tax reduction.”

He also noted that middle-class and working Americans own a good portion of corporate equities through their retirement accounts.