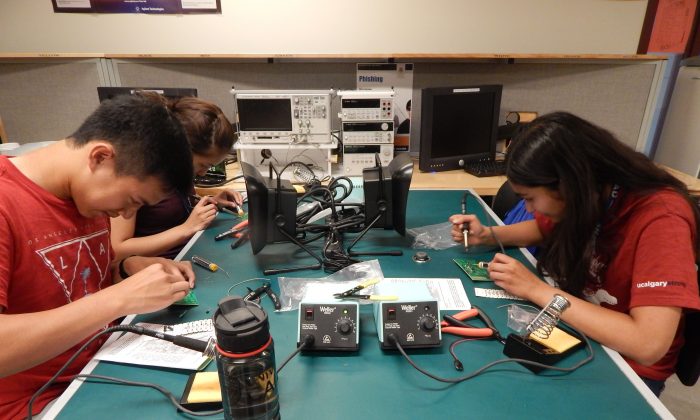 SHAD students at the University of Calgary soldering electronic parts. Thirty participants in the SHAD program have gone on to become Rhodes Scholars. (Courtesy of SHAD)
Canada

It’s difficult to draw similarities between Rhodes Scholars with varied backgrounds and interests, but for the most recent Canadian recipients of the prestigious award, three had participated in a unique learning program open to high school students.

According to Kaleem Hawa, an undergraduate student at the University of Toronto and a 2015 Rhodes Scholar, the SHAD program helped him in finding a connection between global health pandemics and policy studies.

“I participated in the SHAD program in what would be grade 11 at the Laval University campus and it worked well for me because I always had an interest in science and I had a great time with the program,” says Hawa. “After that I went to the University of Toronto for my undergraduate degree and I credit my multi-disciplinary experience to the program.”

Like all Rhodes Scholars, Hawa gets a chance to study at Oxford University, where he plans on focusing on global pandemic preparedness, and methods for preparing for such pandemics as SARS.

It worked well for me because I always had an interest in science and I had a great time with the program.
— 2015 Rhodes Scholar Kaleem Hawa

SHAD, a Waterloo-based charity that operates at host universities across Canada, offers one-month summer learning programs open to high school students. It introduces the students to a multi-disciplinary program combining science, technology, engineering, and math, with each campus offering an immersive program of lectures, workshops, projects, and activities.

The aim is to help the students “expand their intellectual, creative, and leadership skills and find their own Uncommon Purpose,” according to SHAD’s website. The program is followed by internship opportunities, and an Entrepreneurship Cup is held every October.

Thirty participants in the program have gone on to become Rhodes Scholars.

“I would say it played a formative role in my undergraduate experiences,” says Hawa. “It is a great training for students in how to make presentations and how to think interconnectedly. There were very few activities in high school that emphasized it like SHAD did.”

High levels of community involvement are usually a hallmark of Rhodes Scholars, especially among Canadian recipients, and this holds true for 2015 recipient Zia Saleh. The SHAD program helped further expand Saleh’s already heavy involvement in the community, which included helping youth in the Edmonton area and international work with Uganda communities.

“As a young person you don’t get an opportunity to take an idea and bring it to fruition and have that experience,” says the 23 year old Edmonton native, who plans to study health sciences as part of his Rhodes Scholarship.

“SHAD was an opportunity to meet absolutely phenomenal youth from across Canada. It really exposed me to a network of individuals who were interested in creating impacts in the world and creating successful lifestyles. It also exposed me to different interests I never really thought I would have at all,” he adds.

“That was the benefit of the SHAD values—meeting a network of people and having absolutely phenomenal lectures in all sorts of fields to build your interests on what you are going to pursue in the future.”

The third 2015 Rhodes Scholar to participate in the program is James Flynn from Newfoundland.

Canadian Rhodes Scholars total 11 annually, and are selected on the basis of exceptional intellect, character, leadership, and commitment to service.