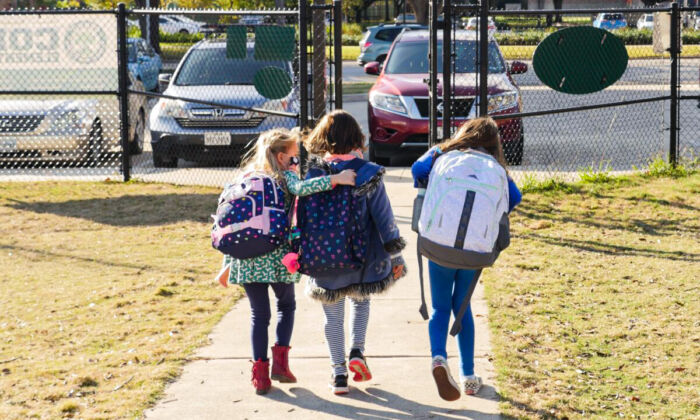 A second Rhode Island health official has not ruled out bringing back school mask mandates, while speaking in a deposition performed for an ongoing lawsuit brought by parents upset their children had to wear masks at school.

“Based on what we know today, RIDOH would not recommend a masking mandate be put in place,” Jaime Comella, director of the Center for COVID-19 Epidemiology at the Rhode Island Department of Health (RIDOH), said during a July deposition, according to a transcript reviewed by The Epoch Times.

“Unless something changes drastically with a new variant that would cause an increase in pediatric hospitalizations or death, I don’t foresee masking being mandated in schools,” she added.

Comella was not aware that there have been zero pediatric deaths in Rhode Island caused by COVID-19. In fact, nobody under 25 has perished from the illness, according to RIDOH data.

Comella is the second RIDOH official not to rule out bringing back a mask mandate in the state, the nation’s smallest by size.

Dr. James McDonald, the agency’s former director, who was still employed by the department when he spoke in June in a deposition for the case, also said a mandate could be brought back.

The school mask mandate previously in place in Rhode Island was lifted in March, based on a decision by the health department and Gov. Dan McKee, a Democrat.

RIDOH and a spokeswoman for McKee did not respond to requests for comment.

On May 19, RIDOH sent out a memo to primary school administrators, saying it recommended “universal indoor masking policies” in schools located in counties that the U.S. Centers for Disease Control and Prevention designated as having high community transmission of the virus that causes COVID-19.

A day later, a letter to parents and students said that students who tested positive for COVID-19, even if they were vaccinated, “must stay home and isolate for at least 5 days” and, if they returned to school on day 6, “they must wear a well-fitting mask on the bus, in school, and at all school-associated masks.

McDonald claimed the letter was not a mandate. He said compliance was voluntary despite the use of the word “must.”

He also said he did not compose the memo or the letter.

Plaintiffs in the school masking case were told by a lawyer with the Rhode Island Office of the Attorney General that Comella was “most responsible” for communicating to the Rhode Island Department of Education that the May 19 memo “should be interpreted as recommending that school districts located in ‘high’ tier communities mandate the wearing of face masks while in school.”

Comella said she did not draft the memo, though a working group she’s a part of with people from other states’ departments did discuss “the concepts” that were included.

Comella also said that parents reading the letter would be wrong to think it was conveying a masking requirement.