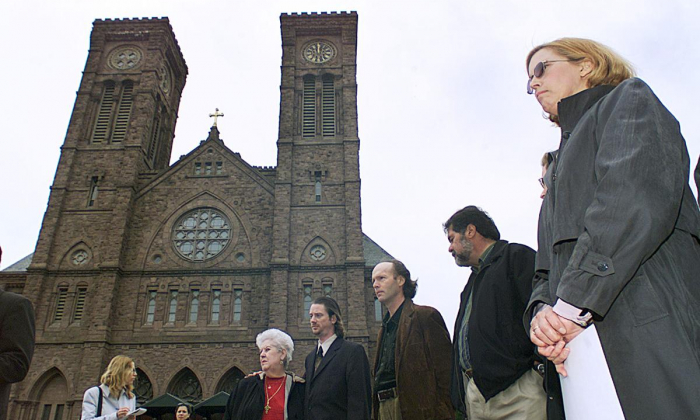 In this May 9, 2002, file photo, Phyllis Hutnak, right, prepares to speak to the media outside the offices of the Diocese of Providence in Providence, R.I. Hutnak said she was seduced by the late Monsignor Louis Dunn of St. Thomas Church in Providence when she was a teenager. Dunn was listed by the Roman Catholic Diocese of Providence on July 1, 2019, as one of several members of clergy, religious order priests, and deacons who have been credibly accused of sexually abusing children. Dunn died in 2001. (AP Photo/Stew Milne)
Crime and Incidents

PROVIDENCE, R.I.—The Roman Catholic Diocese of Providence on July 1 released a list of clerics, religious order priests, and deacons it says have been credibly accused of sexually abusing children.

The list of 50 names posted on the diocese website includes 19 priests and deacons who are still alive, although nearly all have been removed from ministry. One priest resigned. The list also includes 25 dead priests and six others, including religious order priests.

It posted where each of the men once worked. The diocese reviewed files dating to 1950.

Rhode Island is one of the most heavily Catholic states. Bishop Thomas Tobin, in a letter accompanying the list, calls its release “a difficult but necessary moment” in the history of the church.

“The publication of this list is an expression of the transparency we want to encourage, and the accountability we need to accept,” he wrote.

The Survivors Network of those Abused by Priests, known as SNAP, said in a statement that it hopes the release of this information will lead to safer, more informed communities, and that survivors will be encouraged to come forward and make a report.

SNAP asked Tobin to update the list with the full work histories of each accused priest so communities where abusers served know, and called on Rhode Island’s attorney general to independently investigate.

“While we are grateful for the bit of transparency shown by the Diocese of Providence today, we know that the best way to get full transparency and a true accounting of the problem is by relying on secular, independent officials,” the statement said.

“While release of this list is a step forward, we do not view it as the end of the process,” she said in a statement.

Ann Hagan Webb said there are about 15 names on the list that weren’t publicly known before now. Hagan Webb, a former New England coordinator for SNAP, is in contact with many of the clergy abuse victims in Rhode Island.

“There are probably victims sitting at home that will realize for the first time that they’re not the only victim and possibly come forward,” she said Monday. “That’s what my fight has always been about, to take survivors out of isolation and expose the names of perpetrators so they can’t hurt someone else.”

But Hagan-Webb also questioned why the list isn’t longer. She referenced a 2007 court document in a clergy sex abuse case which states that the number of accused priests in the diocese files was about 125, which was reduced to 95 by excluding priests who were not alleged to have committed sexual assaults as previously defined by the court.

“I know there are more to be disclosed,” Hagan Webb said.

The diocese said its director of compliance, a former state police detective, used his expertise to make assessments and judgments about the evidence within the files, and in some cases made additional inquiries.

Survivors of abuse have been asking since at least 2008 for the Providence Diocese to release a list of priests accused of abuse.

The diocese reached a $14 million settlement in 2002 with 37 people who had sued over clergy sexual abuse and has settled other cases since then.

The list includes the Rev. James Silva, who was accused of abuse by several people involved in the 2002 settlement. Silva was removed from the ministry in 1993 and pleaded guilty two years later to sexually assaulting an 18-year-old man. He received a seven-year suspended sentence and was a defendant in multiple lawsuits.

Tobin was installed to lead the diocese by the Vatican in 2005.

More than 140 religious orders and Roman Catholic dioceses have released similar lists. More than 100 of those lists were either released or significantly updated since a Pennsylvania grand jury in August detailed hundreds of cases of alleged abuse.

Many dioceses haven’t historically named priests who were accused after their death because they can’t defend themselves, though some have changed their policy for transparency. The Providence Diocese’s list includes a dozen priests who died before any allegation was received, including Monsignor Anthony DeAngelis, who worked in the diocese administration and died in 1990.

Hagan Webb said that DeAngelis repeatedly molested her in West Warwick as a child and that she began recalling the abuse as an adult. She testified about what happened this year at the State House, to help persuade lawmakers to pass a bill introduced by her sister, Rep. Carol Hagan McEntee, to extend the statute of limitations.

The General Assembly passed the bill last week to give victims 35 years to sue their abusers and institutions that shielded them, instead of seven and three respectively.

Claudia Lauer in Philadelphia and Michelle R. Smith in Providence contributed to this report.