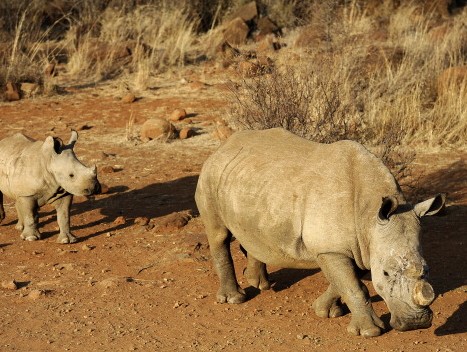 With illegal rhino poaching reaching record levels in 2012, South Africa and Vietnam signed an agreement to help curb the killings of rhino’s for their horns, which are used in traditional Asian medicine.

Demand for rhino horn—erroneously believed to cure a number of ailments or even help with hangovers—has soared in Asian countries, including Vietnam and China. The price for a horn is literally worth more than its weight in gold.

South Africa is the epicenter of the illegal trade, with more than 598 rhinos killed since the start of the year, according to statistics recently released by the South African National Parks. Officials believe that by the beginning of 2013 this number will have increased by 150.

The conservation group World Wildlife Fund (WWF) described the new agreement between Vietnam and South Africa as a ‘turning point.’

According to WWF’s regional Mekong conservation director, Stuart Chapman, the two countries have signaled “their intention to get tough on the criminal syndicates behind the rhino poaching spree.”

The two nations signed a memorandum of understanding that encompasses the broader issue of trading in wildlife parts, but the move will mainly affect the illegal rhino horn trade.

The move comes after South Africa recently announced that it would use a specialized small aircraft equipped with infrared detectors to ferret out poachers in Kruger National Park, one of the main habitats of the rhinos and one of the main poaching spots in the country.

In Vietnam, rhino horns are used as a “miracle medicine,” even though there have been numerous scientific studies done on the subject, saying that rhino horn is comprised of merely keratin—the same substance that forms fingernails—and has no medicinal value.

But even so, Asia-based criminal syndicates pay smugglers large amounts of money to bring the poached horns from Africa to Asia, according to WWF.

According to the BBC, rhino horn can fetch as much as $65,000 per kilogram on the black market, easily worth more than gold.

If poachers continue to involve themselves in the trade of rhino horns, in the future, there might not be many rhinos left for them to kill, conservation groups warn.

“The world’s rhino populations are hanging by a thread, and today the opportunity was taken to throw them another lifeline,” stated Naomi Doak, the head of TRAFFIC’s Southeast Asia division.