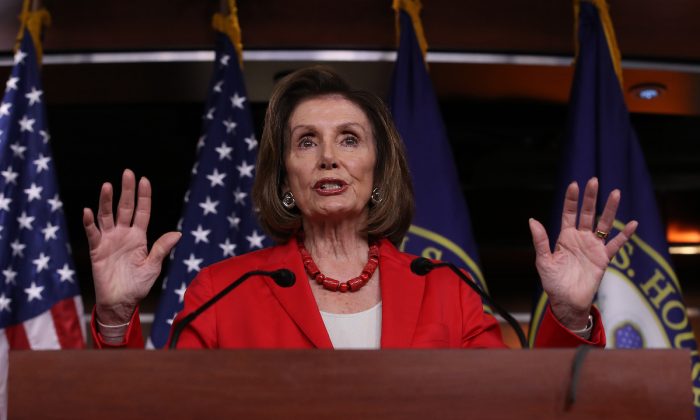 Speaker of the House Nancy Pelosi (D-Calif.) answers questions during her weekly press conference at the U.S. Capitol in Washington on June 27, 2019. (Win McNamee/Getty Images)
Politics

WASHINGTON—Rep. Paul Mitchell (R-Mich.) won’t seek a third term in 2020 because he believes the anger and distrust in Congress is so high that it’s all but impossible to get anything positive done for his constituents back home.

Mitchell announced his plans in a floor speech on July 23, saying “my objective has always been simply to work to address significant challenges this nation faces: health care, immigration, and infrastructure, for example.

“However, it appears to me that rhetoric overwhelms policy, and politics consumes much of the oxygen in this city,” Mitchell said.

He said he wants to spend more time at home with his wife, Sherry, and children, especially his 9-year-old son, who is a special-needs child.

Mitchell’s decision to leave Congress comes just days after a partisan fight erupted on the House floor so bitter that, for the first time in 35 years, a request was made that remarks by the Speaker of the House be stricken from the official record.

Speaker Nancy Pelosi (D-Calif.) precipitated the outburst by telling colleagues during a floor speech, “Every single member of this institution, Democratic and Republican, should join us in condemning the president’s racist tweets.

“To do anything less would be a shocking rejection of our values and a shameful abdication of our oath of office.”

Those remarks prompted Rep. Doug Collins (R-Ga.) to ask Pelosi if she wanted to revise her remarks, and then, when she declined to do so, to ask the chairman to “take down” the speaker’s comment about Trump.

House rules bar members from personally insulting the president in remarks delivered on the floor. The penalty is to be prevented from speaking on the floor for the rest of the day.

During the ensuing parliamentary struggle, Rep. Emanuel Cleaver, a liberal seven-term Democrat from Missouri, suddenly tossed the chairman’s gavel aside and walked off the rostrum.

“We don’t ever, ever want to pass up, it seems, an opportunity to escalate, and that’s what this is,” Cleaver said. “I dare anybody to look at any of the footage to see if there was any unfairness. But fairness is not enough because we just want to just fight. I abandon the chair.”

Before it was over, House Majority Leader Steny Hoyer (D-Md.) ruled Pelosi’s remarks out of order, but he was overruled by the full House in a 232–190 vote.

Even so, the flap was very much an exception to the congressional rule, according to professor Brian Alexander of Virginia’s Washington and Lee University.

Writing on the R Street Institute’s legbranch.org, Alexander said the tensions expressed in this House interchange, and the first demand in 35 years that the speaker of the House’s words be taken down, may seem a sign of the broader coarseness present in today’s U.S. politics. Yet a closer examination of the history of the words-taken-down rule suggests a more complicated reality.

Alexander culled through congressional records to determine that from the 80th Congress, which convened in January 1947, to the 112th Congress that adjourned in January 2013, there have been 251 requests by representatives that a colleague’s words be “taken down.”

That’s an average of 7.67 requests per Congress. There were no such requests in the 90th Congress, while the peak came with 28 in the 104th Congress (1995–96). Only six of the 251 requests, however, resulted in a member being silenced for the rest of the day.

“Given the low likelihood that a full sanction would ever be imposed on members for violating the decorum rules, it can be surmised that members generally accept and adhere to norms of courtesy. Consistent with qualitative findings in interviews, members are, in fact, generally courteous toward one another,” Alexander said.

Things get hot, but maybe not as much as it seems in the headlines about partisan conflict and declining public spirit.

Alexander cautions that “the long-standing norm of courtesy was struck a blow this week, but whether things will continue to get worse remains to be seen.”