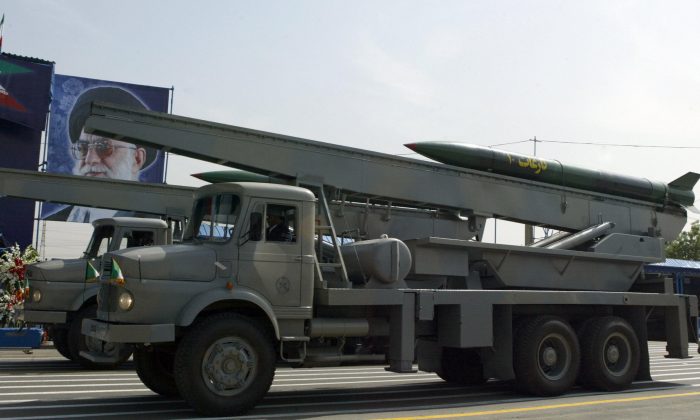 Surface-to-air missiles are displayed in Iran during a parade in April 2007. (Atta Kenare/AFP/Getty Images)
Middle East

Reza Olangian, Duel Iranian and US Citizen, Charged with Conspiring to Obtain Missiles

Reza Olangian, a duel citizen of the United States and Iran, has been charged with conspiring to obtain surface-to-air missiles for the government of Iran.

Olangian was arrested in Estonia on Oct. 10, 2013 and extradited to the United States in March 2013, but the charges against him were unsealed on Oct. 25.

“As alleged, after having been thwarted in his first attempt, Reza Olangian seized on a second opportunity to help arm the Iranian military with surface-to-air missiles and airline parts in violation of international trade sanctions and other laws,” said Preet Bharara, the U.S. attorney for the southern district of New York, in the announcement of the charges.

“Thanks to the outstanding work of our law enforcement partners, Olangian struck out on his second attempt and he will now answer for his alleged willingness to jeopardize this country’s national security.”

The charges allege that Olangian worked with Iranian officials in 2007 to try to get 100 missiles, but the deal was unsuccessful.

He tried again to obtain missiles, beginning in 2012, working with a person he thought was a weapons and aircraft broker, but was actually a confidential source for the Drug Enforcement Administration.

Olangian inspected a bona fide missile remotely during a videoconference, and said that he wanted at least 200 such missiles.

During October of 2012, Olangian traveled to Estonia, where he was arrested. Following his arrest, he stated, among other things, that he had been working with Iranian government officials; that the SAMs he had arranged to purchase were being obtained for the Iranian government; and that the aircraft parts he attempted to acquire were to be used in Iranian military aircraft.

If convicted Olangian faces up to 90 years in prison.

Olangian’s conspiracy could have put American lives at risk, as well as those of our friends across the globe, if put into action,” said Derek Maltz, the agent-in-charge of the DEA’s  Special Operations Division. “DEA possesses the unique ability to direct complex undercover operations thanks to our intelligence capabilities, close partnerships, and vast informant network around the world. These tools have allowed us to infiltrate global criminal networks that threaten America’s security.”