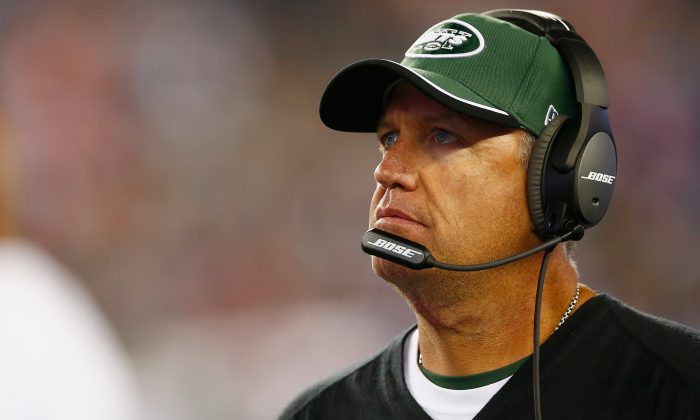 As the Jets welcome the Bills and ex-coach Rex Ryan, a lot of memories come back from the six seasons Ryan piloted Gang Green. Ryan has one of the more complicated legacies an ex-coach has ever had.

Off the field, his annual boisterous Super Bowl predictions put the Jets in the headlines and created an excitement about a franchise that’s had more than its fair share of bad seasons. In short, he put them on the map and at the same time endeared himself to the fans.

On the field, Ryan guided his first two teams (2009 and 2010) to four playoff wins and back-to-back appearances in the AFC Championship game despite having to play on the road in all six games. Meanwhile his young quarterback, Mark Sanchez, performed much better on the postseason stage than in the regular season, leading everyone to think he would soon be the star quarterback the Jets had hoped for.

For a while, Ryan was able to mask his team’s offensive shortcomings with a suffocating defense. The Jets ranked first in 2009 and third in 2010 in fewest yards allowed in the NFL in what would become a hallmark of Ryan’s coaching. (FYI, all six of Ryan’s Jets teams finished in the top 11 in total defense.)

This is where Ryan’s approval rating peaked though—at the end of 2010. Although the Jets started out 8–5 in 2011, they would lose the final three games of the year and miss out on the playoffs as Sanchez continued to struggle while Ryan continued to stick with him.

It would be a sign of things to come.

Sanchez—the fifth overall pick in the 2009 NFL draft—finished and 28th, 27th, 23rd, and finally 31st, respectively in quarterback rating (among qualifiers) in his four seasons (2009-12) as the Jets starting quarterback. Yet not until the end of the 2012 season—after his infamous butt fumble—did Ryan dare bench the “Sanchize” and try someone else at the position.

Here was his biggest downfall on offense—sticking with what wasn’t working for far too long. He didn’t seem to do this on the other side of the ball though.

The Jets would miss the playoffs for the second consecutive season in 2012 and consequently switched GMs from Mike Tannenbaum to John Idzik.

The message seemed clear—Ryan could coach but he could only do so much with Tannenbaum’s rosters.

Idzik recognized the need for a new quarterback but his drafting of Geno Smith in the second round in 2013 would fail to produce an upgrade at the position. Miraculously, with an injured Sanchez missing all of the 2013 season—with the rookie Smith starting at quarterback—Ryan somehow led the team to a respectable 8–8 season.

Still the defensive-minded Ryan paired with a GM who failed to find a good quarterback seemed a recipe for an eventual disaster in 2014 that’s what they got.

What a Difference a Year Makes: How the Jets Have Been Transformed

Despite bringing in Michael Vick as the backup to Smith, injuries in the already-thin secondary contributed to a pass-friendly defense while issues of player discipline—most infamously Smith allegedly not being penalized for his lateness to a team meeting—cropped up.

Despite struggling all season it took a woeful 2/8 for 5 yards and 3-interception performance by Smith in a 43–23 home loss to the Bills that finally forced Ryan’s hand to pull him. By that time the Jets were 1–7 and in the midst of an eight-game losing streak. Meanwhile, although Ryan was still a popular figure, fans had generally grown tired of a weak offense that had become a hallmark of his coaching just as much as his aggressive defense.

Ryan was predictably canned—along with Idzik—at the end of last year’s 4–12 debacle.

Now with a new head coach and GM the Jets are alive and well with a 5–3 mark while putting the newly-acquired Ryan Fitzpatrick—who permanently won the job after the training camp injury to Smith—under center.

It’s turned out to have been a great move by new head coach Todd Bowles and it exposes the main weakness Ryan had on offense in never wanting to bench his starting quarterback unless it was absolutely necessary.

Would Ryan have put Smith back in for Fitzpatrick when healthy? Maybe, but Ryan hadn’t earned another opportunity following his way-too-late hooks for Sanchez and Smith.