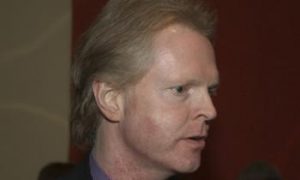 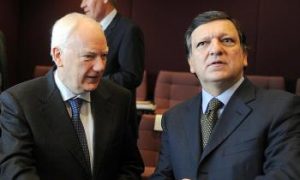 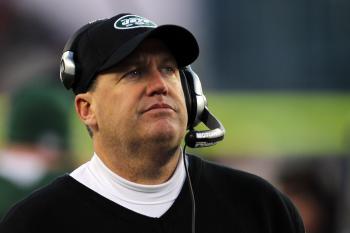 Rex Ryan apparently doesn't like Bill Belichick or the Patriots much, but he has said he has a lot of respect for the Steelers and coach Mike Tomlin. (Jim Rogash/Getty Images)
NFL

By Alex Johnston
Print
Rex Ryan, the boisterous New York Jets coach, who seems to be stuck in the public spotlight, had a number of not-too-savory things to say about their dispatched foe, the New England Patriots, but will not take the same approach with the Jets's upcoming playoff opponent: the Pittsburgh Steelers.

"It's a different feel," Jets coach Rex Ryan said of the matchup, according to The Associated Press.

Before the heated Jets-Patriots game on Sunday, in which New York won 28-21, many of Ryan’s players and the coach himself talked trash and said a number of explicit things about the Patriots’s coaching staff and players.

But as Jets cornerback Antonio Cromartie said, “We've moved on" and are looking to face the Steelers, AP reported.

Ryan said that the Jets-Patriots game is “personal,” and said this wasn’t the case versus Steelers coach Mike Tomlin.

"You look at our backgrounds, we're similar," Ryan told AP on Monday. "We're defensive guys. We both have incredible opportunities. We know that. I just want to win a Super Bowl like he has."

During the regular season, the Jets (11-5) and the Steelers (12-4) met once with the Jets coming out the victor in a heated defensive struggle.

Tomlin has also said he has respect for Ryan.

"I love Rex," Tomlin told ESPN. "Rex has a lot of fun with you guys [the media]. But when you pass all of those things, man, Rex is a great football coach.”

Tomlin said that Ryan “does a great job of motivating” the team and is “very sound schematically.”

The Steelers most recently defeated their AFC North rivals the Baltimore Ravens 31-24.

The Jets and the Steelers will face-off on Sunday at 6:30 p.m. EST.