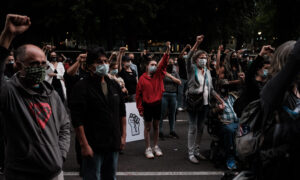 Tale of 3 Republics Is Cautionary for US Today
0 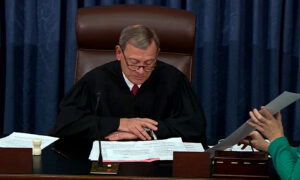 US Ruled by Whim of a Single Supreme Court Justice
0

Rewrite Libel Law and Bring Truth Back Into the News

President Donald Trump had a pithy observation the other day regarding the upcoming presidential campaign.

“My biggest opponent isn’t Biden, it’s not the Democrats—it’s the corrupt media,” he said on “Fox & Friends.” “We have a corrupted media in this country, the likes of which nobody’s ever seen before.”

Trump had similar things to say about the press corps in 2016, so his choice of an enemy is nothing new.

“I’m not running against Crooked Hillary, I’m running against the crooked media,” he said at a rally in Connecticut almost exactly four years ago. But he was right then and he’s even more right now.

Frothing at the mouth when it contemplates Trump in the White House—an outcome it strove mightily to prevent in 2016—the media has now completely abandoned its former professed allegiance to objectivity and fairness in favor of rank and rabid Democrat Party partisanship.

In place of its laughably outdated code of ethics, which emphasized accuracy, eschewed anonymous sources (“consider sources’ motives”), and sought to distinguish commentary from news reports, the media today openly celebrates its loathing of Trump, Republicans, and conservatives, and slants their stories against them every chance they get.

From White House intrigue to movie reviews, every story must have some derogatory reference to Trump.

Where once, for example, headlines would strive for brevity and neutrality, in nearly every report by the three worst print offenders—The New York Times, The Washington Post, and The Associated Press—we encounter such tropes as “Without evidence, Trump says X” or “President falsely claims that Y.” The formerly respected institutions, all of which are now proudly controlled by “progressives,” resemble nothing so much as the three media pillars of the old Soviet Union: Pravda (“the Truth”), Izvestia (“the News”), and Tass (the Russian News Agency).

Meanwhile, on the cable channels and nightly network news, the talking heads have taken the Orwellian concept of the “Two Minutes Hate,” cast Donald Trump as the novel “Nineteen Eighty-Four’s” villain, Emmanuel Goldstein, and expanded the period of public abuse to 24 hours a day. The obloquy began even before Trump took the oath of office and hasn’t let up since.

The public, it seems, can no longer be permitted to make up its mind; rather, it must have its mind made up for it. And as media outlets dwindle and newspapers collapse, power is being concentrated in the hands of a very few, extraordinarily rich men: Lebanese-Mexican billionaire Carlos Slim, in the case of the NY Times, and Amazon poohbah Jeff Bezos at the Post, both among the wealthiest men in history.

You’d think the media would see the danger of such an oligarchic concentration, but instead they love it. After all, Bezos, Slim, and the Sulzberger family, which controls the NY Times’ voting stock, pay their salaries.

Since the Progressive Era in the first couple of decades of the 20th century, elites have fretted about the unwashed and sought to influence and control them. A fine example of their thinking can be found in journalist and power broker Walter Lippmann’s 1921 book “Public Opinion.” A socialist, a veteran of the Wilson administration, and, later, an apologist for the Soviet Union, Lippmann explicitly advocated the shaping of the news for political purposes.

“I argue that representative government, either in what is ordinarily called politics, or in industry, cannot be worked successfully, no matter what the basis of election, unless there is an independent, expert organization for making the unseen facts intelligible to those who have to make the decisions,” he wrote. “My conclusion is that public opinions must be organized for the press if they are to be sound, not by the press as is the case today.”

Lippmann’s prescriptions for social change by media lay largely dormant from the end of World War II to the turn of the new century, but the 2016 election witnessed the triumph of Lippmannism and the destruction of the old just-the-facts-ma’am approach that once distinguished the best U.S. journalism from its European counterparts.

The result is that the greatest obstacle to the orderly exercise of representative democracy in America today is the press, which seeks to control and direct the political process in the guise of news.

Since 1964, the media has been protected from the consequences of its journalistic license by a 9–0 Supreme Court decision in New York Times v. Sullivan. The Sullivan case, decided during the high passions of the civil rights era, established the undemocratic principle that public officials had to overcome near-insuperable hurdles in order to sue the media, however irresponsible, for libel.

The case arose when the NY Times published a factually inaccurate advertisement by supporters of Martin Luther King Jr. criticizing the police of Montgomery, Ala., for allegedly mistreating protesters.

In 1967, the court expanded the Sullivan decision to apply not just to public officials, but to “public figures,” defined as “a person of great public interest or familiarity, such as a government official, politician, celebrity, business leader, movie star, or sports hero.”

“Incorrect harmful statements published about a public figure cannot be the basis of a lawsuit for defamation unless there is proof that the writer or publisher intentionally defamed the person with malice (hate),” it stated.

Generally, the law regarding defamation requires three elements: The assertion must be false; the publication knew or should have known it was false; and it was published anyway, either via “actual malice” or “reckless disregard” (antitheses, but legally the same thing). By introducing “actual malice” into the equation, the court effectively immunized the media from any responsibility for its actions by turning judges and juries into mind-readers.

The court believed it was acting in the spirit of the First Amendment and the defense of free and vigorous debate, and regarded injury to the reputations of public figures as collateral damage in the pursuit of truth. In practice, it hasn’t turned out that way.

The “malice” test has consistently served to defeat plaintiffs over the years—including Gen. William Westmoreland in his suit against CBS and Ariel Sharon in his action against Time magazine, two cases admirably chronicled by Renata Adler in her 1986 book “Reckless Disregard”—largely because an emboldened media could always plead First Amendment protection, even when undeserved, on the grounds that while mistakes were made, its motives were pure.

Naturally, the media hated Adler’s book and did its best to have it suppressed.

But their motives are manifestly impure, ripe and redolent for challenging, especially at a time when “hate” has become criminalized, since the media’s hatred for Trump is obvious to everyone. Scholars and jurists, including Justice Clarence Thomas, are now openly wondering whether it’s time to revisit the carte blanche for character assassination the Sullivan decision has given the media.

As University of Tennessee law professor Glenn Reynolds notes in a recent law review essay on the subject: “In his recent concurrence to the denial of certiorari in the case of McKee v. Cosby, Justice Clarence Thomas called for the Supreme Court to revisit the constitutional protections for publishers of libelous material, arguing that the existing arrangement, dating to New York Times Co. v. Sullivan and its progeny, is out of date and unsupported by the Constitution. As even some left-leaning scholars note, he may have a point, and it seems likely that the Supreme Court will revisit the issue of libel in the near future.”

Recently, Covington, Kentucky, high school graduate Nicholas Sandmann quietly settled a $250 million lawsuit against The Washington Post; earlier this year, he had settled a similar action against CNN. The teenager was flagrantly libeled in 2019 by the media over a misrepresented confrontation with a Native American and a fringe group called the Black Hebrew Israelites in Washington while he was wearing a Make America Great Again hat.

It was impossible for CNN and the Post to claim Sullivan protections, not only because the then-16-year-old boy wasn’t a public figure until they made him into one, but also because their malignant recklessness was abundantly clear—not only from the contemporaneous news coverage, but also from the tweets of media organizations covering the manufactured episode.

Now that the “malice” dike has sprung a leak, what’s to prevent, say, the Trump administration from going after the NY Times and the Post for their “coverage” of the Russian-collusion hoax that has hamstrung the White House practically from day one?

It’s a story that the reporters knew from the start was entirely false, yet they went ahead and published story after story anyway, garnering Pulitzer Prizes for the NY Times and the Post for “deeply sourced, relentlessly reported coverage in the public interest that dramatically furthered the nation’s understanding of Russian interference in the 2016 presidential election and its connections to the Trump campaign, the President-elect’s transition team and his eventual administration.”

Nothing, that’s what. Personal destruction at the hands of a few editors in New York and Washington shouldn’t be the price of fame, especially when it’s the media itself that gets to decide who is a “public figure.”

With Thomas practically begging lawyers to bring him a case, the president and other wronged celebrities ought to accommodate him and go on a lawfare rampage that will cost the NY Times and the Post millions, in the certain knowledge that, as the old saying goes, the media has to be lucky all the time and the plaintiffs only have to be lucky once. As rich as they are, even Slim and Bezos will eventually tire of this game, if only for the damage it does to their reputations.

Given the revolving-door relationship between the Democrats and the media, the media’s attitude is the textbook definition of partisan malice. As the old Soviet joke had it, “There’s no news in the Truth [Pravda] and no truth in the News [Izvestia].”

Looking at the wreck of journalism over the past few years, are things any different here now?