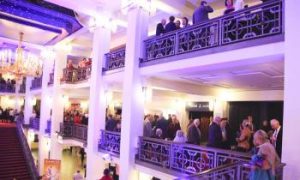 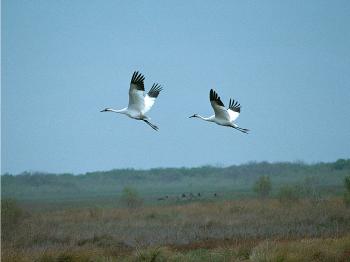 By Mary Silver
Print
Endangered whooping cranes were killed near Albany, Georgia, in the southwest part of the state. Hunters found three dead birds that had been shot, and reported the deaths to the U.S. Fish and Wildlife Service (FWS) on Dec. 30.

“We can’t get into details," said Tom MacKenzie, media contact for FWS. "It’s still under investigation."

FWS is offering a reward of up to $12,500 for information that leads to the successful prosecution of the shooters. MacKenzie said the Department of Justice and the prosecutor would determine what penalties to pursue if the perpetrators are found.

A program to restore the population of these elegant, ancient birds has been in process for years. “To have three shot is definitely a painful experience for those involved” in the restoration effort, MacKenzie said.

The dead birds were part of a recovery effort organized by the Whooping Crane Eastern Partnership, which is working to reintroduce whooping cranes into the region, according to a FWS news release. There are only 570 whooping cranes in the world, including 400 in the wild, and 100 in the eastern U.S. migratory population. The three dead cranes were banded and had roosted in Tennessee. It was their first migration.

MacKenzie was stoic about the loss. “We’ve had other setbacks," he said. "One year an entire class that was following an ultralight (learning how to migrate) was hit by lightning, or a tornado. A real setback.” Despite the disappointments, at least “we’ve come from zero to 100 in 10 years,” he said.

Multiple groups gave money toward the reward. Among them were the Humane Society of the United States along with the Humane Society Wildlife Land Trust, the U.S. Fish and Wildlife Service, the Georgia Ornithological Society, the International Crane Foundation, Operation Migration, the St. Marks Refuge Association, along with the St. Marks Photo Club, and the Georgia Conservancy, according to a statement from the FWS.

Whooping cranes are covered by the Endangered Species Act, state laws, and the Migratory Bird Treaty Act, which makes killing them a federal crime, MacKenzie said.

To give information about the incident, please contact U.S. Fish and Wildlife Service Special Agent Terry Hasting at 404-763-7959 (ext. 233).