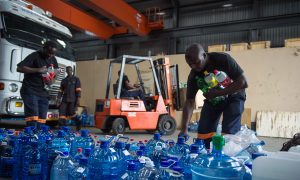 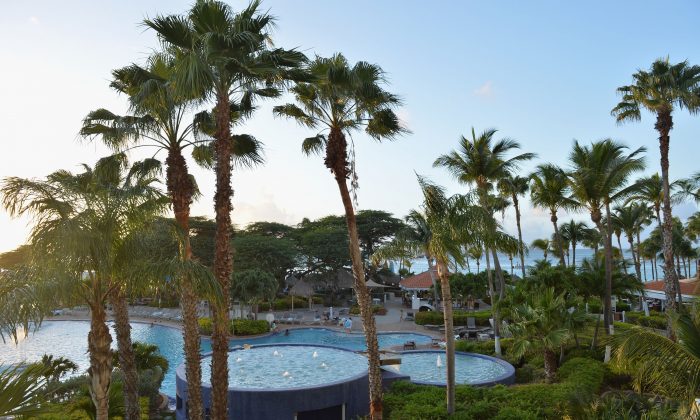 A resort on Aruba. The island nation is building a 3.5-MW solar airport, perhaps the largest such installation in the world. (Andrew H. Walker/Getty Images)
Climate Change

Revolution on the Front Lines of Climate Change

Clean energy technologies are making headway throughout the Caribbean—and the US should take note.

Lefties Food Stall, a pint-sized eatery serving Barbados’s signature flying-fish sandwiches, recently became the first snack shack on the Caribbean island to be fitted with a solar panel. The nearby public shower facility sports a panel as well. So does the bus shelter across the street, the local police station, and scores of gaily colored houses on the coastal road leading into the capital, Bridgetown.

Like many other small island nations, Barbados has to ship in all of the oil that it uses to produce electricity—making power over four times more costly than it is in the fuel-rich United States.

That high price has proven to be a boon for Barbados’s fledgling solar industry. Nearly half of all homes boast solar water heaters on their roofs, which pay for themselves in lower electric bills in less than two years. Increasingly, industries like the island’s small desalination plant are installing solar arrays to meet a portion of their power needs.

This move to solar is being driven by tax incentives for green businesses and consumers. In an address marking the United Nations Environment Program’s (UNEP) “World Environment Day” in Bridgetown’s Independence Square, Barbados Prime Minister Freundel Stuart recently pledged that the island nation would produce 29 percent of its energy from renewables by the end of the next decade.

That rather conservative goal is still over twice what the United States currently produces with renewables. It won’t be hard to reach. Not only is the island blessed with abundant sunshine, it also has year-round trade winds to run wind turbines, and sugar cane waste—or bagasse—that can be used as a biofuel.

The Barbados government is furthermore looking into harnessing the energy of the tides, as well as introducing ocean thermal energy conversion (OTEC), a technology that employs the temperature difference between cooler deep and warmer shallow sea waters to generate electricity.

Clean energy technologies are slowly making headway throughout the Caribbean. And the nearby United States, the world’s No. 1 historical emitter of carbon emissions, should pay attention.

Barbados is not alone in the Caribbean in its enthusiasm for green technology.

Aruba is planning a 3.5-MW solar airport, perhaps the largest such project in the world. The Dutch-speaking island has combined wind and solar power with energy efficiency measures to cut its imports of heavy fuel oil in half, saving some $50 million a year.

The volcanic islands of Nevis, Montserrat, and St. Vincent have contracted with Icelandic geothermal companies to conduct exploratory projects to determine how to tap their vast geothermal potential. Meanwhile, mountainous Dominica already meets about half of its energy demand with hydropower.

Caribbean islands don’t just have abundant resources for developing clean energy. They also have compelling reasons to do so. The region is burdened by some of the highest energy costs in the world, which have stunted its industrial development and drained its reserves of foreign exchange.

The islands also have fragile ecosystems like mangrove forests and coral reefs, which are highly vulnerable to oil spills and pollution. And many countries like Barbados depend on tourists, who will flock there only so long as the places remain attractively clean and green.

But the best reason to cut carbon emissions is the danger that these island nations face if climate change proceeds unchecked. And indeed, climate change is already having a big impact.

In recent years, lower rainfall in the eastern Caribbean has posed a threat to agriculture and scarce groundwater supplies. Sea level rise as well as ocean acidification and warming have killed many protective coral reefs, leading to severe beach erosion. And the hurricane-prone region is being battered by increasingly frequent and powerful storms.

At the World Environment Day event in Bridgetown, the prime minister of St. Vincent and the Grenadines, Ralph Gonsalves, called climate change “the most serious existential threat in the world today.”

That is certainly true for St. Vincent and the Grenadines. Successive storms ripped through the islands in 2010, 2011, and 2012, leading to a yearly loss of up to 17 percent of the developing country’s GDP, as well as destroying hundreds of homes and killing dozens of islanders.

“If my people don’t get flooded out on the coast,” the prime minister observed ruefully, “they will be washed away in landslides.”

Barbados’s prime minister, Freundel Stuart, echoed his counterpart’s sense of urgency. “Since the issue involves our very survival,” Stuart told the crowd, “capitulation is not an option.”

Stuart said he believes that the Caribbean should set “a shining example” for the world to follow. His government recently commissioned a Green Economy Scoping Study, prepared in partnership with UNEP and released in Bridgetown in June, which includes recommendations on how to make the island’s agriculture, fisheries, transportation, and energy systems more sustainable.

It makes sense: these islands are on the front line for climate change’s destructive forces, so they should also be on the front line in cutting their own carbon emissions. They need to demonstrate how seriously they take the threat, as an example to the rest of us.

Right now, energy production in the Caribbean is anything but sustainable. Venezuela’s late socialist President Hugo Chavez offered many islands long-term loans and concessionary rates for cheaper oil. His successor has done his best to maintain the modest subsidies.

But nobody can say how long this largesse will last, given Venezuela’s current financial crisis, and still less what will happen to already stressed island economies when they are forced to pay full price for crude.

The Caribbean needs to become energy-independent in order to thrive. But overhauling energy infrastructure does not come cheaply. There are knotty technical challenges related to the stability of the grid that few small nations are currently equipped to meet. And the small scale of the demand for electricity on many of the islands makes it hard to attract international investors.

Moreover, countries like Jamaica, St. Kitts-Nevis, Grenada, Barbados, and Antigua and Barbuda are saddled with public debts that often exceed their annual GDP. So unlike an industrial powerhouse like Germany, for example, few Caribbean nations are in a position to fully exploit their renewable energy potential.

The big industrial powers that are responsible for the problems of island nations should be lending a helping hand to the folks suffering the most from climate change. Loans from international development banks, as well as technology transfers and training from wealthier countries, would go a long way. International development banks also need to prime the pump with programs to encourage prudent investment.

This isn’t charity. By helping islands that are geographically close to the United States go green, Washington won’t just be cutting harmful greenhouse gases for everyone. It will also create opportunities to learn valuable lessons in overcoming technical challenges—about how, for example, to successfully integrate intermittent inputs from wind and solar into the power grid, a problem that has limited the U.S.’s own adoption of renewables.

The vulnerable islands of the Caribbean are a perfect laboratory to test solutions on a small scale that can eventually be applied to the far more complex U.S. energy infrastructure.

After World War II, America lent its economic muscle to help rebuild Europe’s shattered economies through the Marshall Plan. It is time to have a Marshall Plan for clean energy—not to rebuild war-torn nations, but to help protect our abused climate system from further damage. The Caribbean, blessed with a wealth of sun, wind, and geothermal energy, is a great place to start.