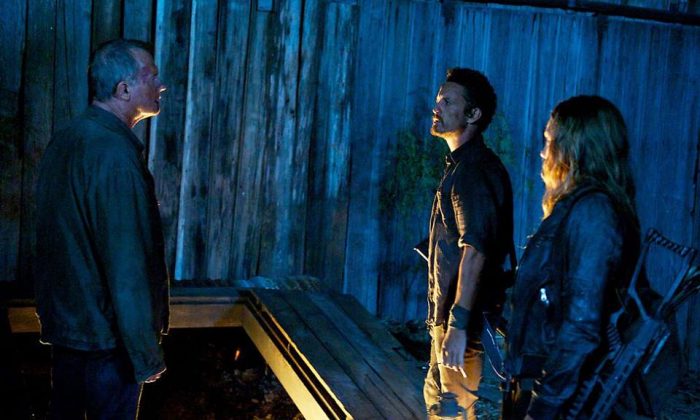 Revolution returns to NBC at 8 p.m. EDT, with season 2’s episode 10. The show is not cancelled, it’s just returning from a mid-season break.

The last episode, “Everyone Says I Love You,” ended with Cynthia being shot dead by Horn. After she died, Aaron asked a boy, which was the manifestation of the nanotech, to kill all the Patriots in the high school where Cynthia and Aaron were. The boy does so, but wonders why Aaron didn’t ask for Cynthia to be healed. He leaves after killing the Patriots.

Episode 10 is titled “The Three Amigos.”

“Neville and Julia mount a new plot while Aaron quests after the nanites,” NBC describes the episode as.

In the trailer, we can see Miles is recovering on a bed, while Rachel walks in and says “you scared the hell out of me.” Others gather in the room, including Monroe, who says he has to talk to Miles .

Miles says that the son’s name is Connor, and that he’ll take Monroe to him.

Check out the trailer and preview photos below.