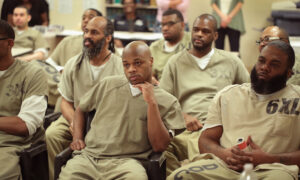 The Grievances of African American Prisoners, and Politicians’ Failure at Reform
0 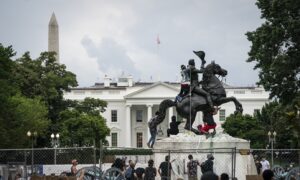 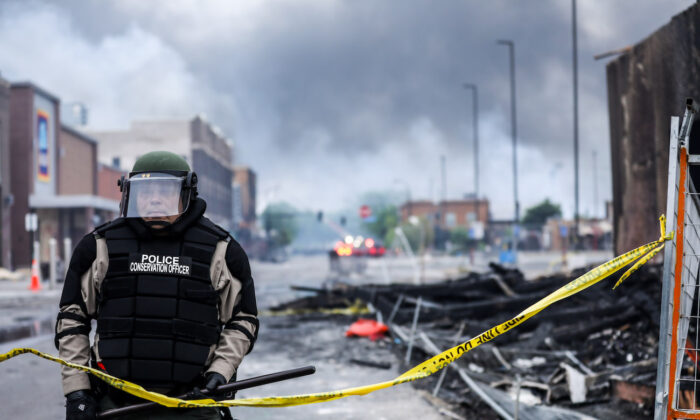 A police officer stands amid smoke and debris as buildings continue to burn in the aftermath of a night of protests and violence following the death of George Floyd, in Minneapolis, Minn., on May 29, 2020. (Charlotte Cuthbertson/The Epoch Times)
Viewpoints

The recent turmoil—the protests, riots, occupations, vandalism, and destruction across the country and in other countries in response to a death in police custody in Minneapolis—reminded me of my own days as a student radical.

In May 1968, I was in London, excited as any of my contemporaries by the “events” of that month. The student revolt in France, which spread like wildfire, gained some support among artists, intellectuals, even sections of workers, and seemed to herald the revolutionary overthrow of the government and the “system.”

Some recalled the words of the poet Wordsworth, composed in 1804, in response to the French Revolution of 1789. He recalled the exhilaration many young people felt at what seemed a dawning of a new age of liberty, equality, and fraternity. As he put it,

Bliss was it in that dawn to be alive,
But to be young was very heaven!

I shared the enthusiasm of the students in Paris—I wrote a leaflet, titled “France Today, Britain Tomorrow,” and went down to the London docks with a few comrades and handed it out to some bemused dockworkers there. The aim, as in many earlier revolutions, was an alliance of students and workers that would transform society.

My contemporary (though unknown to me at the time), the English philosopher Roger Scruton, was in the Latin Quarter of Paris at that time, watching the mayhem in the cobbled street below.

He was filled with repugnance at the nihilism, the glee with which demonstrators below injured policemen, overturned cars, uprooted lamp posts, pulled up cobblestones to make projectiles, and vandalized buildings and defaced them with graffiti.

He had a particular dislike for the revolutionary spirit, with its self-righteous contempt for the knowledge and wisdom that we inherit unearned from our forebears, along with the duty to preserve, improve the culture, and hand it on to future generations.

What he saw in Paris was a self-indulgence, a squandering of a great patrimony, a kind of play-acting by the privileged youth who would soon enough settle down and become good bourgeois themselves.

Scruton became a lifelong conservative in the tradition of that great critic of the 1789 French Revolution, Edmund Burke. It took me several more decades to see that he was right.

The activists and leaders of revolutions are often not those for whom they claim to speak.

In France, it wasn’t the workers who led the revolt, but students and intellectuals. Indeed, the once-revolutionary French Communist Party, along with its large trade union, presented itself as the party of order, organizing its members on demonstrations to keep the workers physically separate from the students.

In Mao’s China, at the same time, the Cultural Revolution—formally the Great Proletarian Cultural Revolution—was a movement launched by Mao Zedong to remove those in the party he saw as a threat to his power. It was an intra-elite struggle rather than a working-class insurrection against the ruling bureaucracy as a whole.

The Black Lives Matter (BLM) and Antifa movements in the United States are led by people who claim to be revolutionary (“We are trained Marxists,” as one founder of BLM said), but they do not pretend to be movements of workers or to seek an alliance with workers as trained Marxists had done in the time of Marx. They emphasize race rather than class. At the same time, the mass of protesters, in Minneapolis as in Seattle and elsewhere, aren’t anarchists or Marxists, or working-class, or even black.

So the radicals of the 1960s—already influenced by the identity politics promoted and funded by the Ford Foundation and federal bureaucracy—at least talked about a worker–student alliance, and those of the present do not.

Like some of today’s “Marxists,” they adopted some of the creepy-cult practices of the Cultural Revolution—the denunciation, public repentance, shaming, groveling, kneeling, prostrating, the iconoclasm—that have led some to call today’s BLM a religion for woke white people or a white-guilt cult.

The radicals, then as now, rejected what the Cultural Revolution called the Four Olds—old ideas, old cultures, old customs, old habits. We see today the elements of indoctrination into a cult of wokeness, but in this case, as a kind of human resources activity for white public employees to “interrupt [their] whiteness.”

Large corporations have publicly endorsed and lavishly funded BLM. White multi-billionaire Jeff Bezos regales us with his view of what we should be reading and watching about race every time we go to an Amazon website to order anything. In our new cancel culture, employees, teachers, and celebrities have been Twitter-mobbed or fired instantly for daring to express the slightest question about the movement or its association with lawlessness, violence, and intimidation.

That’s not how I remember the 1960s. As Sohrab Ahmari asks in The Spectator:

“Does anyone seriously believe the American establishment—Walmart, Facebook, Amazon, Netflix, the trustees of Ivy League universities, the major sports leagues, even Brooks Brothers, for God’s sake—would sign on to a movement that genuinely threatened its material interests? And yet these and many other firms and institutions are falling over themselves to express solidarity with the ‘uprising,’ some going so far as to donate millions of dollars to Black Lives Matter, an outfit that lists among its objectives the abolition of the nuclear family.”

Who Is Using Whom?

Is BLM using its clever hashtag name to gain money and support from well-meaning liberals while pursuing by any means necessary extreme aims of destruction of society, its traditions, customs, habits, and institutions? Or is the ruling class using BLM for its purposes? Do they simply share a coincidence of interest in bringing down President Donald Trump and his program?

Does the American establishment support BLM because they like to be on the winning side and think the movement will win? In that case, the answer to Ahmari’s question would be affirmative. They think Americans will come to believe as BLM does, and as The New York Times is teaching its readers and our children to do, to despise their country and its traditions and values, to see everything in politics and history as about race, as Marxists once saw it as about class.

Or does the ruling elite, who dominate the commanding heights of economy and society, see BLM as a necessary evil, the best chance of defeating Trump in the upcoming election and regaining political power? That is a declared aim of BLM and the ruling class’s highest immediate priority.

Is such support a continuation of the policy response to the race riots of the 1960s, a “developmental separatism” that balkanizes and separates the working class into formal categories or identities and keeps them weak and divided? Every success of Trump—such as the unprecedented rise in real wages and fall in unemployment for blacks and Hispanics in Trump’s term prior to the pandemic—has to be minimized or denied.

By rejecting the nation and its founding as rotten and racist to the core and from the start, the mainstream media turn the expression of patriotism, not least the traditional and joyful celebration of Independence Day by all classes and races, into a display of white supremacy.

Everything that can be is used to delegitimize the 2016 election and Trump’s presidency, to ensure a speedy return to the rule of the affluent, educated elites who had dominated both parties and presided over the ruin of the industrial heartland, the major cities, and working-class families of all races.

The adolescent attitudinizing supported and funded by adults may seem a small price to pay to signal virtue and to damage Trump. But BLM is, in the words of a leading black theologian, “a trademark phrase … designed to use black people. That phrase dehumanizes black people.”

Much of Minneapolis may lie in ruins, with minority small businesses built with decades of sweat and tears looted and destroyed in minutes. To the indulgent rich, the university-credentialed managerial elite, and the experts, it’s a price worth paying to restore the old regime and signal their virtue at the same time.

In short, understood this way, the present turmoil isn’t a revolution at all, but an anti-democratic counter-revolution.