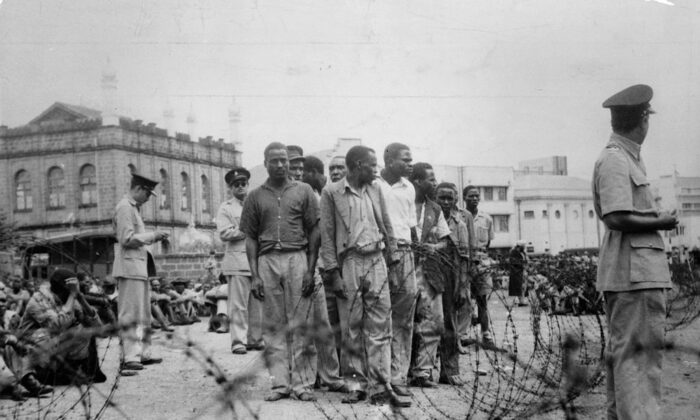 The Mau Mau uprising happened in Kenya in the 1950s, and revisionist historians have argued that the uprising was a peasant’s revolt to force Kenya’s independence.

It resulted in at least 30,000 horrific killings, mostly committed by the Kikuyu, against other members of this tribe and white British settlers.

A recently published book challenges the claim of revisionist historians that the evils of colonialism spawned the violence, brutally repressed by the British.

The book “Mau Mau Whitewash—Britain Slandered” by Lee Boldeman is a courageous and historically accurate attempt at describing and analysing the Mau Mau insurrection, including the origins of the terror and its aftermath.

Boldeman’s book constitutes a powerful critique of the revisionist account of the Mau Mau Terror and deals objectively, impartially, and factually with this dreadful part of Kenya’s history of the 1950s.

Readers who are interested in the power of historical discourse, in both its revisionist and factual versions, will find this book fascinating.

The book is a historical narrative that exposes the origins of the Mau Mau Terror, details the atrocities committed and explains the importance of oath-taking in Kikuyu society.

As such, the book explores the distortion of historical truth by those bent on rewriting history from an ideological point of view.

The author describes and dismantles the theories of revisionist historians who have dismissed the Terror as an independence movement.

He also reveals the role played by Marxist-Leninist theory and practice underpinning the Terror and its later explanation.

Further, the book contains useful information on the Kikuyu tribe and the African mind.

Boldeman describes the Kikuyu tribe as a deeply reverent, superstitious society where violence begets violence. He also explains how the British came to be in Kenya and details the Mau Mau Terror and the responses of the British colonial administration and government.

Boldeman’s aim is not to whitewash English involvement in the atrocities but to objectively detail the horrific happenings of the 1950s in Kenya.

He rightly questions the account given by Professor Carl Rosberg and Professor John Nottingham, and other revisionists, who downplayed the Terror as a heroic independence movement.

Boldeman compellingly rejects Rosberg’s claim that “the Mau Mau was an integral part of an ongoing, rationally conceived nationalist movement.”

This is an important contribution to Kenya’s history because it aims to revisit the Mau Mau’s murderous trajectory in Kenya in the 1950s by perceptively analysing the momentous events of that time.

This book reveals this dreadful part of history and enhances our knowledge of the Mau Mau Terror by considering its origins, aftermath, and consequences.

In one chapter, Boldeman discusses relevant colonial documents, which concern the events in Kenya in the 1950s and specifically addresses allegations critical of the British colonial authorities and the treatment of the Mau Mau detainees. This chapter reveals the biased and incorrect nature of the revisionist Mau Mau history.

The book then examines who is responsible for the carnage and details the story of Jomo Kenyatta, who later became the first prime minister and president of Kenya, discussing his moral responsibility in the events of the 1950s.

Boldeman admits that the reconstruction of historical events is always a challenging and perilous task for historians. This is because, often, historians consider historical events through an ideological lens that distorts or seriously misinterprets these events.

In recent times, we have seen this in attempts to rewrite history by evaluating past events in the light of historians’ progressive understanding of morality, or to enable tyrannical governments to maintain power.

The expulsion of historical truth from history books is a worldwide practice.

I know that when I was a primary and secondary school student in Belgium in the 1950s and 60s, history books described King Leopold II of Belgium as a great Belgian King, who bequeathed the Belgian Congo, now known as the Democratic Republic of the Congo, to Belgium in 1908.

The King had owned the Belgian Congo as a personal fiefdom until then. He compelled people to work in his rubber factories, and if they did not perform, their hands were cut off.

Yet, until recently, he was still revered in Belgian history books as a great Belgian King who gave the nation an empire.

However, statues in his honour were recently dismantled after he had been denounced by the present King Philippe of Belgium.

The demonstrable manipulation of history, so richly evident in revisionist publications about the Mau Mau Terror, necessitates a reflection of the appropriate role of universities in the teaching of history.

Although Boldeman indicates that “a primary task of any university is to teach students to think critically,” there is a significant body of commentary to the effect that universities do not fulfil that purpose and no longer exclusively admit students able to contribute to the function of, and to profit from their involvement with, higher education.

It is thus pleasing that this book encourages people to think about the horrors of the Mau Mau insurrection. As such, it is an erudite contribution to the literature on the Mau Mau and the role of the British colonial administration in Kenya in the 1950s.

Lee Boldeman has thus successfully repositioned the debate and questioned the conclusions and narrative of the revisionist historians and commentators.

He concludes that “The Mau Mau sought political power using murder as its method, and the sharpened edge of rusty pangas as its instrument. It was the Kikuyu themselves who paid the terrible price of Kenyatta’s political ambitions.”

Boldman’s book constitutes a splendid contribution to the existing Mau Mau literature. It will undoubtedly become a standard text for those who want to delve into this episode of the history of the British Empire and Kenya.