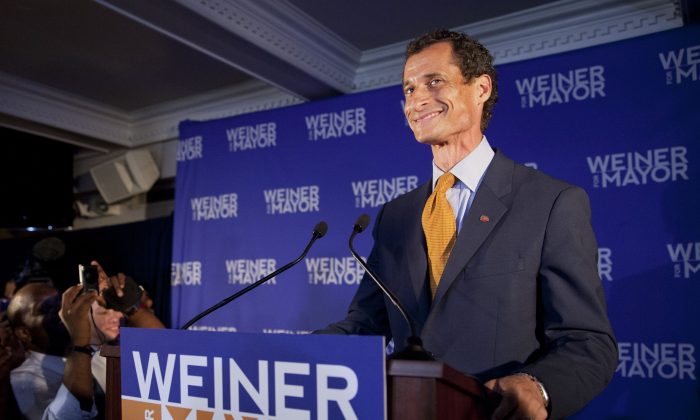 Film Review
By The Associated Press

There are lots of fly-on-the-wall documentaries. But occasionally there’s one that makes you want to ask the fly: Just HOW did you get onto that wall, and how did you manage to stay there?

In the case of “Weiner,” the compulsively watchable new film about Anthony Weiner and the implosion of his 2013 New York mayoral run amid a revival of his sexting scandal, part of the answer is clear. Director Josh Kriegman once worked for Weiner, who was forced to resign his congressional seat in 2011. And Weiner clearly hoped Kriegman and co-director Elyse Steinberg would be documenting an inspiring comeback.

At first, it seemed like they were, as the charismatic Weiner chipped away at public skepticism (if not the media’s) and climbed to the top of the polls. Then it all came crashing down, as more lurid photos and text exchanges emerged, some that occurred after Weiner’s resignation. And for some reason, Weiner and his wife, Huma Abedin—a longtime top aide to Hillary Clinton, and current vice chair of her presidential campaign—let the filmmakers keep going.

As Kriegman himself asks at one low point, inches away from the miserable couple in their own kitchen:

“Why are you letting me film this?”

It makes for riveting filmmaking—as a portrait of a campaign in crisis, of a fascinatingly flawed politician, and especially of a marriage.

Why, indeed. But it makes for riveting filmmaking—as a portrait of a campaign in crisis, of a fascinatingly flawed politician, and especially of a marriage. Watch Abedin’s face as she stares at Weiner on the day the scandal breaks anew, disappointed and stunned, with no words spoken and none necessary.

We begin with a chastened Weiner, at the end of the race, reflecting: “I guess the punchline is true about me. I did the things,” he acknowledges. But he adds, sadly: “I did a lot of other things, too.”

And the film, which seeks neither to judge nor ignore Weiner’s actions, sets out to show it. A prelude includes footage of Weiner’s impassioned speeches in Congress, on behalf of 9/11 responders, for example. We see why voters liked him. Then we see that Twitter image of bulging underwear, the humiliating media coverage, the resignation.

Two years later, though, Weiner’s ready to try again. The early days of his mayoral campaign are encouraging. We see Abedin smiling, laughing, and quipping lightheartedly to her husband in an elevator: “I’m not crazy about those pants.”

We meet the campaign’s energetic and loyal young volunteers. We see the couple making fundraising calls, Abedin expertly buttering up her contacts, and Weiner exclaiming “Kaching!” when she succeeds. Suddenly Weiner’s leading in the polls.

And then the other shoe drops. We see campaign staffers in battle mode. Abedin’s face is drained of its smile—for the rest of the film. Nervously, she tells a packed news conference that she loves her husband, and they’re moving forward.

But of course they can’t. Weiner’s besieged with scandal questions. We watch a painful meeting in which campaign staffers express their hurt. Abedin, ever the pragmatist, suggests to Weiner’s visibly upset top aide that when she exits the building, “You will look happy”—lest reporters see her crying.

Can it get worse? Yep. After a painful, combative TV interview, Weiner watches at home and laughs. Abedin stares. “Why are you laughing?” she asks. “This is crazy.” Asked later how she’s doing, she replies: “It’s like living a nightmare.”

Then on Election Day (spoiler alert: he loses!) Weiner’s erstwhile sexting partner, Sydney Leathers, seeks to confront him. Aides conspire to avoid her by detouring through a McDonalds. In an excruciating exchange, Abedin is heard saying to her husband: “I am not going to face the indignity of being accosted by this woman.”

Weiner and Abedin apparently haven’t seen the film. One wonders if now, they regret allowing the directors such intimate access. Either way, the filmmakers have done a compelling job as flies on that wall.