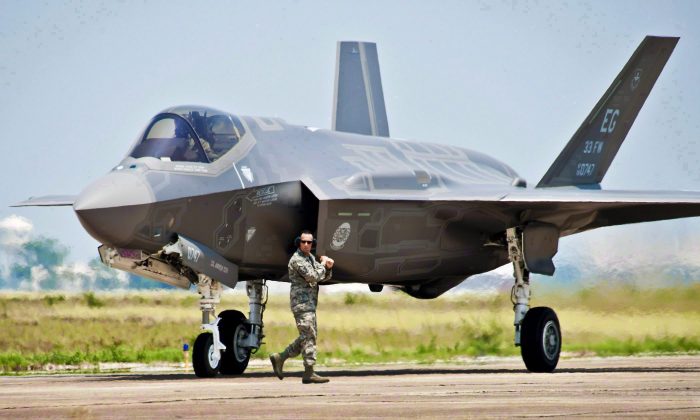 Review Warns Government That Cost of Replacing CF-18s Is Rising

OTTAWA—The Harper government is being warned that there’s increasingly less wiggle room in its $9 billion budget envelope if it intends to buy the F-35 stealth fighter.

On Wednesday, Dec. 10, the public works secretariat overseeing the replacement of the country’s existing CF-18s released its annual assessment of the program, which has been on hold for two years.

The independent review says the lifetime cost of owning the radar-evading jet has edged back up to $45.8 billion over 40 years.

That figure includes the cost of buying 65 jets, as well as maintaining and operating them over their entire service life.

After a scathing auditor general’s report accused National Defence and public works of low-balling the cost and not doing their homework, the Conservatives put the program on hold and froze the purchase budget at $9 billion.

But the review released Wednesday warned that time and various economic factors are eating away at the cushion of contingency funds, which is now estimated at just $76 million.

Even a slight variance in inflation or the exchange rate could blow the budget envelope.

Experts at the accounting firm of Grant Thornton, which conducted the review, say the project remains affordable within the existing framework and suggest that if the contingency gets chewed up, the shortfall “could be met by buying fewer aircraft.”

But the analysis notes that even over the long term, there are risks because in order to meet the maintenance costs the F-35 would have to be flown much less than the current fleet.

The analysis suggests that if the government decides to continue with the program, it could start buying the planes in 2020 with a few aircraft arriving each year until the CF-18s are retired in 2025.

The federal cabinet received an overall analysis of what options are out there to replace the current fleet, which is over 30 years old, but it has yet to make a decision whether to continue—or hold an open competition.

There was a Pentagon report last month that stated Canada wanted to buy four F-35s in the 2015-16 budget year and had asked the U.S. Air Force to make arrangements, but the notion was shot down by senior government officials.

The F-35 has been the subject of cost overruns and delays for years and the analysis suggests that hurdles, mostly in the plane’s advanced systems, remain a problem.

“Software continues to be the most challenging technical risk to the F-35 program,” said the report. “Software build delays and limitations in delivered software capabilities have caused delays in mission system testing, putting at risk the schedule for achieving initial operating capability.”