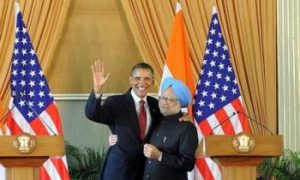 Blame it on Ronald D. Moore. His re-imagined Battlestar Galactica raised the bar high, not just for remakes of slightly cheesy 70s series, but for sci-fi in general.

So the new series of V arrives with a huge baggage of expectation: will it be gritty and subtle, full of realistic characters and dark, political allegory like BSG was?

Umm, no. The new V is schmaltzy, hurried and flat. And, for all the money that has obviously been spent on it, it looks cheap.

Okay, judging a 13-part TV series on its pilot is a little unfair, but that’s the situation we’re in, so here we go.

V, if you don’t – as many modern audiences won’t – know was an 80s phenomenon, with two miniseries and a spin-off series following that. In the UK alone more than 10 million people tuned in for its debut in 1983, one of the largest audiences ever for a sci-fi launch. By today’s standards the effects look cheap, but there was a compelling grittiness to the action and undeniably suspenseful cliff-hangers.

It’s about an alien race called the Visitors who arrive hovering above the major cities of the world in their spaceships. They promise peace and friendship – all they’re after is water to save their dying world, they say.  But a small band of resistance fighters quickly find out the Vs are not what they claim to be. They’re actually reptilian humanoids intent on wiping out the human race.

So far, so David Icke. And perfect fodder for a remake you’d think, as conspiracy theories have now entered the mainstream consciousness (see 2012, Lost, The X-Files).

But here the allegory is played with sledgehammer subtlety – ooh look, there’s Christ on the cross falling over as the Vs arrive, what could that mean? And see, here’s a young man saying “My God” as the huge ships roll overhead, I wonder what point is being made?

It also suffers more than most from that modern affliction: the whole cast is good looking. At one point, Party of Five’s Scott Wolf audaciously asks why all the Vs are so attractive. Look around Scott – the entire cast is attractive. Realism, schmealism.

And this is the crucial point: BSG succeeded in its unswerving dedication to realism (it did jump the shark a little by the end, though). V seems to have forgone realism for a kind of middle-of-the-road safeness.

Alright, so it’s not terrible. There’s a nicely judged action sequence when the Vs break up our nascent resistance fighter group, Morena Baccarin as V leader Anna is suitably icy, and the special effects are fantastic.

We’re told the plot will remain true to the original with a “21st century twist”. Let’s hope so.