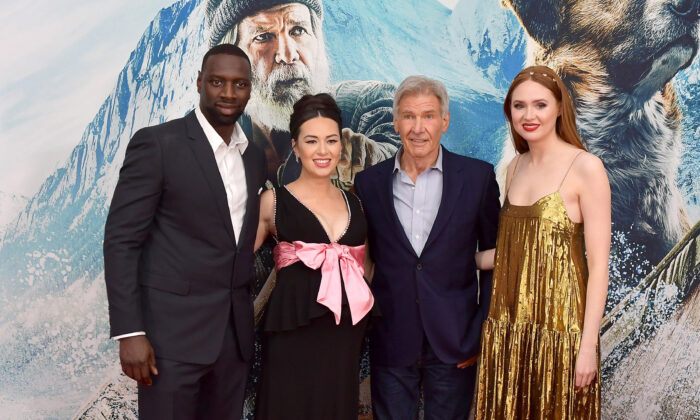 Review: The Newest Film Adaptation of ‘The Call of the Wild’

Generations of young Americans have read Jack London’s evocative 1903 novel “The Call of the Wild” (TCOTW)—the saga of Buck, a large, powerful dog whose life journey starts on a sun-kissed Santa Clara estate, moves to the harsh Yukon when he is kidnapped to work as a sled dog, and ends when he finally abandons human society completely and blends back into the wilderness from which his undomesticated ancestors came.

I read the novel in 1962 under the expert supervision of my English teacher, Mr. Ted Walters. Last Saturday, I drove two hours to take Mr. Walters with me to see the newest film adaptation (the eighth, I believe) of London’s classic. It was truly a thrill for teacher and pupil to come together 58 years later to compare notes about how well TCOTW fared in its 21st century retelling.

You know, of course, the common refrain, “The movie wasn’t as good as the book.” To put it simply, that statement has rarely been truer than in the present case. I had a great time with Ted, but the film was a huge disappointment. Thankfully, Jack London isn’t around to see this neutered, watered-down, politically correct reinvention of his powerful story.

The first rule of thumb in writing a screenplay based on a loved novel is that whatever elements of the story are changed (whether by addition, substitution, or subtraction) should improve the story. They should either strengthen the plot, deepen the characterizations, or enhance the mood and/or message. Unfortunately, most of the changes in this new film (and there were many) were for the worse.

To be fair, the producers of this movie were confronted by an obvious problem: Contemporary audiences have neither the stomach nor the tolerance to watch images of animals being wounded and killed.

In London’s novel, violence and death are grim facts of life: Buck is severely abused and beaten by humans on several occasions; dogs fight to the death (what London called “the law of the fang”—one of the elements totally whitewashed from this version of the story) and even the victor can suffer awful wounds; people and dogs die by falling through broken river ice; a primitive aboriginal tribe (fictitious) annihilates Buck’s human friends, and Buck retaliates by slashing open the throats of several of them.

I figured such depictions might be tolerated for two reasons: First of all, war movies depicting gory wounds to human bodies are quite common, but in this age of animal rights, it appears that even a fictitious story can’t depict animal wounds in any detail. Second, people would know that computer-generated images, and not real dogs, would be the objects of violence. Indeed, Buck and his canine companions were entirely CGIs, yet most of the violence was culled from the story anyhow.

On top of that, CGI diluted the dramatic impact of London’s plot by making the dogs seem too fake, imparting an almost cartoonish aspect to the movie that undermined the stark realism that London’s novel described.

Attention: From this point on, spoilers will be even more specific. Skip to the last paragraph if spoilers bother you.

The three main characters of the story all suffered from the way they were redrawn in this movie.

1. Buck. The film introduced Buck to us as an impulsive, out-of-control, overgrown mischief-maker dog on his owner’s California estate. This injected a note of comedy (probably in the attempt to make this a family movie), but in the novel, London portrayed Buck as dignified and regal, even when the judge’s children played with him.

In the book, Buck fought far more valiantly and persistently against his kidnappers than he did on screen (again, to spare viewers the violence). In his primal environment, Buck was an unabashed killer—not out of depraved motives, like much human violence, but because “kill or be killed” was the law of the wild.

2. John Thornton. Although Thornton is the principal human protagonist, in the novel, he doesn’t enter the story until past the halfway point. But because the producers hired the great Harrison Ford to play this role, they naturally had to expand the part to give Ford more scenes, so he appears much earlier. The Thornton character in the movie was a loner, whereas in the novel he shared a camp and companionship with two men named Pete and Hans. The screenwriter added a backstory to flesh out Thornton’s character: He went to the Yukon grieving the loss of his son, and that is how he explained his solitary, thankfully moderate, boozing (not an element in the novel) to Buck. While Ford’s acting was fine, the character’s range, as written, was quite limited. Ford may someday wish he had declined to play this role.

3. Hal. In the novel, Hal is a hot-headed, immature, cowardly bully, egregiously out of place in the Yukon. In the movie, he is all that, but also a ruthless, relentless homicidal maniac—a giant stretch from the original. Poor Dan Stevens. The British actor has done some great work since leaving his lead role in “Downton Abbey” early on (most notably, his magnificent portrayal of the beast in 2017’s “Beauty and the Beast”), but here he played a one-dimensional cardboard character unsalvageable even by his considerable thespian talents.

4. Perreault and Francoise. In the book Francoise was a Francois (male), but the casting of a woman and making her Perreault’s mate worked fine. In fact, the segment of the movie that featured Omar Sy and Cara Gee in these two roles was the most enjoyable part.

Like the characters, the plot was considerably reworked, too. I won’t list the many changes, but if you’re looking forward to seeing the three key scenes that enhanced the legend of Buck in the eyes of Thornton, Pete, and Hans—Buck’s willingness to jump off a cliff at Thornton’s command, Buck rescuing Thornton from river rapids, and Buck winning a thousand-dollar bet by pulling a thousand-pound sled all by himself—forget it: They are omitted in this version.

This new film has a distinct politically correct flavor to it. I’ve already mentioned the obvious concessions to animal rights activists and the omission of any mention of aborigines. In 2020, it wouldn’t do to have native Americans killing intruders into their long-hidden sylvan Eden—even though we know of cases of Stone Age tribes attacking outsiders when the latter violated their preferred isolation and seclusion.

The novel’s battle to the death between Buck and Spitz ended in a PC technical knockout, by which the defeated Spitz was allowed to walk away rather than die. Apparently, PC wants us to reserve the activity of savage killings to human beings and to downplay violence in nature (thus, the omission of Buck leading the wolfpack on their successful moose hunt). And then there was today’s obligatory anti-wealth piety: Harrison Ford (net worth: approximately $230 million) stating that gold sufficient to buy a lifetime’s worth of groceries is wealth enough. Oh, please!

In closing, I suppose this isn’t the worse movie you could take your young teenagers to see, but if you really want to expose them to a riveting story that shows how the natural world can rival human societies for harshness and danger, have them read Jack London’s novel to get the undistorted picture.